It’s not something we’ve had to become accustomed to in the past year or so as Chelsea supporters, but our defending was absolutely wretched on Tuesday night against Roma.

There have been little signs of incompetence this term, not least the fact we’ve conceded at least once in 9/14, and the seeds were sewn as early as the first game of the season, back when Burnley ran riot at the Bridge.

So perhaps a bit of a thrashing has been due, and we certainly got one of those on Halloween night in Rome.

The die was cast rather early in the piece: Stephan el Shaarawy netting the Italians’ opener after just 39 seconds – the sixth fastest goal in Champions League history – after good work from Edin Dzeko, before el Shaarawy bagged his second after making the most of Antonio Rudiger’s error.

Diego Perotti made it three after slack defending from Pedro, and even then the hosts had chances to extend their lead.

It is arguably a hammering that can act as a wake-up call ahead of the trip to Old Trafford on Sunday, although the continued speculation about the future of Antonio Conte – one tabloid suggested he was on his way out this week to be replaced by Carlo Ancelotti – coupled with the poor performance does set tongues wagging. It is probably just typical newspaper mischief; let’s hope so anyway.

To be fair, it’s not all doom and gloom anyway. Atletico Madrid could only draw with Qarabag on Tuesday, which means that we are still in pole position to escape Group C and will do so if we bet the Azerbaijanis next time out.

And so we turn our attention to Sunday’s meeting with Manchester United, and a trip north to see the Special One. The Blues suffered defeat at Old Trafford last time there, and so revenge will certainly be a tasty dish after a turbulent week for the club.

The news that Tiemoue Bakayoko is playing through the pain barrier at the moment further accentuated the need for N’Golo Kante to return to full fitness sharpish.

Bakayoko has never fully recovered from the effects of his knee surgery in the summer, while Cesc Fabregas has looked tired after playing a lot of minutes for the club already this term.

Kante flew to Rome with the squad but decided late in the piece that he wasn’t ready to take to the field as yet, so let’s hope that’s a sign he’s saving himself for the United encounter on Sunday.

Gary Cahill was substituted off after 56 minutes in Rome but for tactical reasons only, so he will be fit and needed to help tackle the physical presence of Romelu Lukaku. On that note, we might expect Rudiger to keep his place despite his error on Tuesday; he matches up well with Lukaku from a physical perspective.

Will Kante come into the side? We certainly hope so, and while both Bakayoko and Fabregas could do with some time off the international break is on the horizon, so we’d expect the latter to miss out for tactical reasons.

The last decision Conte will need to make will be on Alvaro Morata. After a red-hot opening to the season, the Spaniard has looked off the pace of late and missed a couple of glorious chances in Rome and at Bournemouth. Michy Batshuayi is poised for a call up….but he may have to wait should Conte keep faith in his summer signing. 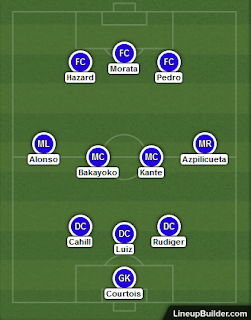 This is one of the most storied fixtures in English football, with more than 175 meetings between the two sides and many of those high stakes clashes.

Historically it’s United who enjoy the upper hand with 76 wins to 52, with 49 draws. But the tables have certainly turned of late….

Chelsea have lost just one of their last thirteen matches against the Red Devils, with seven wins and five draws.

Five of the last six meetings between these two at Old Trafford have ended in stalemate.

For anybody who watched Manchester United’s 0-0 draw with Liverpool, or their 1-0 win over Spurs, you will already know how Mourinho will set his side up here.

He will post big Lukaku up front and play off him; largely with Marcus Rashford and Henrikh Mkhitaryan, and – as he showed with his late winner against Tottenham – Anthony Martial.

So the key is to ensure that Lukaku does not go unchallenged; make sure plenty of pressure is applied to him so he can’t flick away those headers or passes to midfield runners. That is perhaps why Conte will opt to keep Rudiger in the side.

Little was made of it by the pundits, but United actually switched to a back three last week with Bailly, Jones and Smalling in the centre and Valencia and Young acting as wing backs, with Rashford playing off Lukaku through the centre.

That will play into Chelsea’s hands, as it will create more one-on-one battles across the pitch. We would anticipate that the Blues would get the better of most of those when comparing the players man-to-man.

We particularly like the thought of Eden Hazard just playing off Ander Herrera’s left shoulder. The Spaniard is rash in the tackle and occasionally finds himself out of position – Hazard could well be Chelsea’s match winner on Sunday….which will no doubt please Mourinho no end!
Email ThisBlogThis!Share to TwitterShare to FacebookShare to Pinterest