In his pre-match press conference, Antonio Conte labelled this as Chelsea’s ‘most important game of the season’, and you can see where the Italian is coming from.

The Blues will confirm their place in the last 16 of the Champions League with victory against the Azerbaijani minnows, although Conte himself isn’t taking anything for granted.

We have to play the most important game of the season from the start until now," he said in interview.

“If we are able to win against Qarabag, we can go through to the next round of the Champions League and this is very important because this period from now until January is very busy, so it is very important to win the game.

“For sure it won’t be easy because in the last two games they drew twice against Atletico Madrid, and before that they lost the game but Roma were struggling a lot to win against them so it is very important to be focused, to work and to try to win the game.”

At least Chelsea go into the game in high spirits following the 4-0 demolition of West Brom at the weekend. A brace from Eden Hazard plus further goals from Alvaro Morata and Marcos Alonso secured a comfortable victory and lifted us up to third in the Premier League table.

There are no new injury doubts, which means that only Victor Moses (thigh) and Michy Batshuayi (ankle) are missing for the Blues.

Moses may be fit enough to return at the weekend, but surely won’t be risked here, and otherwise Conte has a full deck to play with.

So how will he line his side up? Well, as he’s mentioned, this is a must win game, and victory will render the Blues’ potentially tricky game against Atletico Madrid meaningless.

As such, Conte will play his strongest side here….but what does that look like?

Combined, Qarabag managed just two shots on target in their other two home Champions League ties against Atleti and Roma, although at least they tried to play football by commanding an average of 47% possession across those two games.

But the Azerbaijanis surely don’t have the weapons to hurt us, so expect the usual back five (Zappacosta in for Moses), with Cesc Fabregas slotting in alongside N’Golo Kante in midfield.

Expect Pedro to come into his usual Champions League role in attack alongside Hazard and Morata. 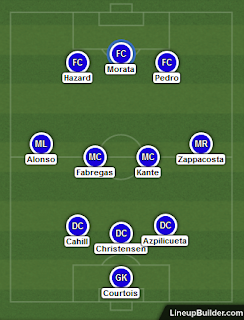 Qarabag vs Chelsea Head to Head

The reverse fixture was actually the first time that these two sides have met, and it turned into something of a baptism of fire for the Azerbaijanis!

Chelsea strolled to a 6-0 victory, firing in seven shots on target and hitting the woodwork. With seven shots blocked and seven corners won, the margin of victory could have been even greater.

But Qarabag have bounced back well from that hammering and given Atletico and Roma, two excellent sides by any measure, a real good game in front of their own supporters. Chelsea can expect a similarly determined opponent on Wednesday.

If the possession stats from their last two Champions League games are anything to go by, Qarabag will give it a go on Wednesday night.

They scored against Roma and even managed to net away from home against Atletico too, which is no mean feat, but by-and-large their attacking play is pretty limited.

So the main task from Chelsea’s perspective will be finding that winning goal, and hopefully Álvaro Morata and Eden Hazard’s fine link-up play will continue. They looked in fine fettle against West Brom on Saturday, and if they can replicate that form there is no reason why they can’t contribute with a goal or two here.

When teams defend deep, and in numbers, it is essential to stretch the play as wide as possible. That is hopefully why Conte will opt for Zappacosta on the right flank ahead of Azpilicueta, who is perfectly serviceable there, but the Italian offers a greater attacking edge.

Expect Cesc Fabregas to dictate play from deep, and his ability to pick a defence-splitting pass will be crucial. Pedro too, for his work rate and eye for goal, will need to be at his best.

Famous last words, but there is little chance of Chelsea losing this game. And as long as our four or five key attacking personnel are at the races, there’s every chance we’ll take all three points back to London.
Email ThisBlogThis!Share to TwitterShare to FacebookShare to Pinterest