Roma vs Chelsea Match Preview (31/10/17): No Scares for the Blues Ahead of Halloween Trip

If you could pick the perfect manner in which to head into a key Champions League encounter, then Chelsea’s 1-0 win over Bournemouth was exactly it.

The Blues were scarcely troubled by their hosts – the Cherries’ first shot on target came in 92 minutes, and if the scoreline appears close then bear in mind Chelsea had a goal disallowed and also missed a couple of gilt-edged chances.

The icing on the cake is that Antonio Conte was able to take off Pedro and Alvaro Morata with around 15 minutes to play, and gave Gary Cahill the afternoon off in order to prepare for Tuesday’s trip to Roma.
Embed from Getty Images

Conte had been incensed in the build-up to the Bournemouth game that his methods had been questioned, and that his players were unhappy with his training sessions and management style. The win on the south coast was the perfect rebuttal.

So on to Tuesday’s trip to Rome, where an in-form Roma side await. They’ve won five of their last six in Serie A, keeping a clean sheet in four of their last five, and the whole club has undergone a sea-change under Eusebio di Francesco – and gone, largely, are the entertaining, high scoring but ultimately disappointing, for them, matches.

Well, almost. They were dragged back to their dark days in the reverse fixture, with Chelsea dominating the opening 40 minutes and opening up a two goal lead.

But back came Roma, courtesy of Edin Dzeko’s wonder goal, amongst other things, to claim a point and leave Group C neatly poised.

All Chelsea must do in Rome is avoid defeat; easier said than done, of course, but that is the bottom line. Do so, and the last 16 of the Champions League beckons.

How’s about this for a slice of good news: N’Golo Kante participated in a full training session on Monday alongside his Chelsea teammates.

Whether the Frenchman is fit enough to play a full part in Italy remains to be seen, but the fact that he is clearly on the mend is a great sign.

There are no new injury concerns and so Conte has a full deck to choose from – albeit accounting for the absence of Victor Moses.

We anticipate that he will opt for the 5-4-1 formation he has tended to use in big games against tough opposition, with Eden Hazard operating just behind Alvaro Morata and Pedro in a more withdrawn central role alongside Tiemoue Bakayoko and Cesc Fabregas (assuming that Kante is not fit to start).

Conte may also choose to use Cesar Azpilicueta in the right wing back role, stiffening his back three with Antonio Rudiger alongside David Luiz and Gary Cahill. 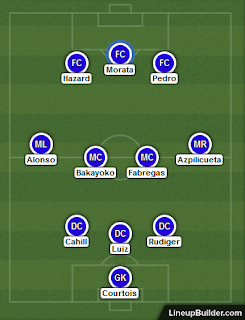 Roma vs Chelsea Head to Head

The reverse fixture between the two sides was just the fifth meeting between the pair, with Chelsea extending their unbeaten streak at Stamford Bridge against the Italians to three matches.

It also means that the Blues have only lost to Roma once; although that came in their last meeting on Italian soil in 2009.

Remarkably, Roma have kept nine clean sheets in thirteen matches this season, and their defence-minded policy suggests that the 3-3 draw in the reverse fixture between these two sides was something of an anomaly.

So expect a cagey affair at the Stadio Olimpico, and with a draw arguably suiting both teams (we each still have a game against Qarabag to play in Group C after all) it wouldn’t be a surprise is a stalemate ensues.

We saw the best and the worst of Roma at Stamford Bridge a couple of weeks ago, with their negative play exposed brilliantly by the Blues in the first half before the quality Roma have going forward – when they choose to express themselves – was clear for all to see as they netted three times.

But with the main motive being to avoid defeat, we’d expect all 22 players on the pitch to be comfortable simply going through the motions.

If Kante plays then that’s a huge fillip for Chelsea, but if he doesn’t then not to worry. Cesc Fabregas will sit in alongside Tiemoue Bakayoko – and let’s hope he hasn’t been mentally scarred by Garth Crooks’ scathing attack on him (tongue firmly in cheek there) – while Pedro will presumably be detailed with a deeper role than normal to help shut down the middle of the pitch, where Roma’s most gifted players roam.

This could be a classic Italian ‘chess on grass’ style encounter, and we wouldn’t be surprised if it ends up 0-0 or 1-1 to be perfectly honest.
Email ThisBlogThis!Share to TwitterShare to FacebookShare to Pinterest