West Brom vs Chelsea Match Preview (18/11/17): Blues Prepared for Trial by Air at the Hawthorns

Three Premier League wins heading into the international break meant that Antonio Conte could afford to feel pretty satisfied with his work in his fortnight off, but now it’s back to business with a week that could help to define the Blues’ season.

Okay, so a trip to the Hawthorns to take on West Brom doesn’t exactly sound like an all-important fixture, but Conte will learn a lot about the heart and character of his side in the West Midlands given the physical onslaught he can expect his players to face.

And then on Wednesday we have the trip to Azerbaijan to take on Qarabag; victory there would secure our passage into the last 16 of the Champions League, and render the probably tricky game with Atletico Madrid meaningless.

The good news is that the Blues squad has reconvened from international duty in largely good health. Michy Batshuayi pulled out of the Belgium squad with a foot injury and is likely to miss out on the West Brom game, but otherwise Eden Hazard, Tiemoue Bakayoko and David Luiz appear to have shaken off knocks.

Ah, David. Dropped for the Manchester United game, he had to watch on as replacement Andreas Christensen put in a composed display and helped to shackle Romelu Lukaku in a fine 1-0 win. For now at least, you would assume that means the Dane is Conte’s first choice sweeper.

Three points against the Baggies could life Chelsea as high as second in the league table; let’s see if the doom-mongers are as vocal then.

So Batshuayi is definitely out of Saturday’s game, and unfortunately Victor Moses hasn’t fully recovered from his thigh tear either and will sit out again.

Otherwise, Conte has a full deck to play from with Hazard, Luiz and Bakayoko shaking off knocks picked up on international duty.

So the manager will now to need to pick a starting eleven based upon the task in hand at the Hawthorns, and with a nod to the Qarabag game on Wednesday. The two fixtures are likely to be something of a contrast….

West Brom are a physical side who will play on the back foot and look to make the most of any set pieces that they earn. They will provide aggressive resistance, particularly in midfield, and so Conte’s team selection will surely account for that.

Qarabag, meanwhile, will play on the break and look to frustrate Chelsea, and the onus will be on the Blues to prise open the Azerbaijani’s resilient rearguard effort. Again, that will give Conte some pointers as to team selection, and the likes of Cesc Fabregas and Willian will probably make the eleven on Wednesday, but not here. 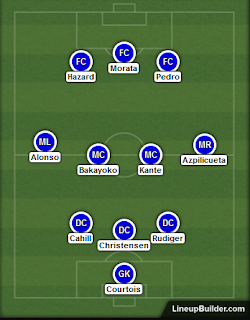 There have been more than 130 meetings between these two sides dating back more than a century, and while West Brom are one of those sides that have a ‘bogey team’ style quality about them, the good news is that Chelsea rarely fall prey to their charms.

The Blues have lost just one of their last nine against the Baggies (W5 D3 L1), and while our record at the Hawthorns in recent years has been mixed – W2 D1 L3 – the good news is that our last two trips have both ended in victory.

You may just recall the last trip to the West Midlands: that was back in May when Michy Batshuayi’s goal secured a 1-0 win and the Premier League title!

There are no frills and no surprises as far as West Brom are concerned, and their switch to a 3-4-3 style system earlier in the campaign has done little to change their conservative approach.

Gareth McAuley, Jonny Evens and Ahmed Hegazi is an uncompromising a back three as you will see, and they will need to be beaten on the ground and with pace rather than aerial brawn. Allan Nyom and Kieran Gibbs will probably play at wing back, and while both have pace to spare neither should hurt us in an attacking sense.

In midfield Tony Pulis can call upon the fantastic Grzegorz Krychowiak, surely one of the most under-rated signings of the season, alongside the evergreen Gareth Barry and Jake Livermore, with two of Nacer Chadli, Jay Rodriguez, Matty Phillips, Hal Robson-Kanu and Solomon Rondon afforded the opportunity to express themselves in attack.

It is, in essence, a man-for-man representation of the Chelsea system, although the Baggies’ midfield three will sit deeper to protect their backline.

The point is that West Brom shouldn’t have the tools to hurt Chelsea from open play, and as long as we defend set pieces effectively we should be fine – if Conte selects Gary Cahill and Antonio Rudiger that will help.

In their last two home games the West Midlanders have shipped five goals against Manchester City and Watford, so there’s every hope that Chelsea can also breach this stubborn defensive line and take the three points back to London.
Email ThisBlogThis!Share to TwitterShare to FacebookShare to Pinterest