Parcheggiare l'autobus is the Italian translation for ‘park the bus’ (or the Google Translate version of it, anyway). And that might well have been a phrase that Antonio Conte uttered to the Chelsea players prior to their 1-1 draw with Liverpool at Anfield on Saturday.

He fielded the usual back five plus three defence-minded midfielders in N’Golo Kante, Tiemoue Bakayoko and Danny Drinkwater, creating a wall of blue designed to stifle Liverpool’s attacking forays.

And it worked, by and large, as the Reds were restricted to just four shots on target.

The Blues fired in three shots of their own as they counter-attacked well with Eden Hazard pulling the strings and Alvaro Morata sniffing around dangerously. Ironically, it was a complete mishit from Willian that levelled the scoring after Mo Salah had given Liverpool the lead.

After a week of long flights and early mornings following the midweek trip to Qarabag, this was very much a point earned, rather than two lost, at Anfield.

But there’s no rest for the wicked, with a rare midweek set of fixtures in the Premier League bringing Swansea to Stamford Bridge on Tuesday.

It has been a hectic few weeks for the players, so Conte will need to handle his squad effectively, but there’s no reason why we won’t win comfortably against a Swansea side that has lost six of their last eight outings.

We were completely spot on with our assessment of the Liverpool game – the manager switching to the 5-3-1-1 formation that we had suggested he might, but he won’t show so much respect to Swansea in midweek.

We’ll be playing the favoured 3-4-2-1 system, and with only Michy Batshuayi definitely out injured Conte has a full deck to play from.

He may opt to rest Hazard – the Belgian was visibly leg-heavy towards the end of the Liverpool match. There really is no need to push him too hard ahead of the hectic festive schedule.

So that would presumably bring Pedro and Willian back into the side, and surely Cesc Fabregas will return in midfield to add a greater attacking emphasis.

Is Victor Moses ready to make a return to the starting eleven? He was on the bench at Anfield, but with the game in the balance there was no ideal moment to bring him on. Expect the Nigerian to get some minutes on Wednesday; but he may have to make do with a place on the bench again behind the impressive Davide Zappacosta.

There is a slight chance that Conte may rest Cesar Azpilicueta too, although this is clearly a player he adores. 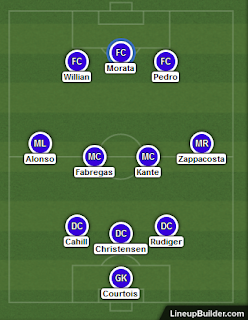 Swansea have been rather late bloomers in the beautiful game, and so there are only 33 previous meetings between the two teams to call upon.

Chelsea have won 15 of those with 11 draws, so it’s fair to say the Blues have enjoyed the best of things against the Welsh outfit.

If we take the last ten in isolation, we note a resounding W6 D3 L1 record in Chelsea’s favour, with the Blues winning four of the last five at the Bridge. Indeed, other than a League Cup victory, Swansea’s only win at Chelsea came back in 1925!

The pair last met in February, where goals from Fabregas, Pedro and Diego Costa secured a 3-1 triumph.

So what does this Swansea side bring to the table? The truth is very little. They’ve failed to find the net in more than 270 minutes of Premier League action, have lost their last three away games and, in six games on the road this term, have scored just three times.

As such, complacency could be the Chelsea players’ biggest obstacle here, but playing at home should render any fears of them taking their foot off the gas obsolete – the Stamford Bridge faithful simply won’t allow any slacking!

Swansea’s best attacking outlet is one of our own, the on-loan Tammy Abraham, and he isn’t allowed to play on Wednesday as part of those loan terms. That means an already shot-shy Swans side will have to make do without their top goalscorer.

They’ll have to rely on Wilfried Bony to lead the line, supported by one of either Jordan Ayew or Renato Sanches.

Defensively, Swansea have conceded at least once in 8/13 matches this term, but only two or more in five of those thirteen, which suggests they are a tougher nut to crack than many give them credit for.

The problem on Wednesday is that they will allow Chelsea to have plenty of the ball, and you would think by law of average that the Blues will ultimately break them down and find the net.

The fact that the Welsh outfit plays with a flat back four will be music to the ears of Alvaro Morata, and we’d expect him to score in a conservative victory for the home side.
Email ThisBlogThis!Share to TwitterShare to FacebookShare to Pinterest