What a difference 34 minutes can make. That’s all it took for Michy Batshuayi, on as a substitute for Alvaro Morata, to score two goals, help create another and set the wheels of a fantastic comeback in motion on Saturday against Watford.

The Hornets had forged ahead 1-2, despite Pedro’s sublime opener, and in truth Chelsea didn’t look like getting back into the contest.

That was until Batshuayi was sent forth from the bench, and despite showing few signs of quality in the year or so at the club the Belgian really came to the party on Saturday lunchtime. His first was a powerful header from a Pedro cross, while his second was a determined effort in which he refused to give up until the ball was nestling in the back of the net.

It was a fantastic tonic for Antonio Conte, who has been looking rather glum of late, but his joy was evident as he dived into the crowd to celebrate the fourth goal. The naysayers will say ‘but it was only Watford’, but go and ask Liverpool or Arsenal fans what they think of the Hornets’ improvement this term under Marco Silva.

There is respite, of sorts, in midweek with Wednesday’s Carabao Cup clash with Everton. The Toffees have just relinquished manager Ronald Koeman of his position, with David Unsworth stepping into the fold as caretaker. If the Merseysiders play in Unsworth’s mould, they will be determined and uncompromising at the Bridge, and desperate to prove their doubters wrong.

We suspect Conte will make changes to his starting eleven and hand out some rests where possible, although the pessimists will tell you that this is Chelsea’s best chance of getting their hands on some silverware this season. Only time will tell on that!

This preview was written prior to Conte’s pre-match press conference, and so we are left guessing as to who will feature in his starting eleven on Wednesday.

If you remember back to the last round of this competition – the 5-1 win over Nottingham Forest – you may recall many fringe players getting a go. Willy Caballero, Andreas Christensen, Davide Zappacosta, Kenedy, Charly Musonda and Batshuayi all started, with Omari Sterling and Ethan Ampadu coming on from the bench.

We might expect something similar against Everton, particularly with N’Golo Kante still out and David Luiz battling an ongoing knock. Conte may want to rest the Brazilian and Tiemoue Bakayoko, who is Kante’s only real deputy in the Chelsea squad. 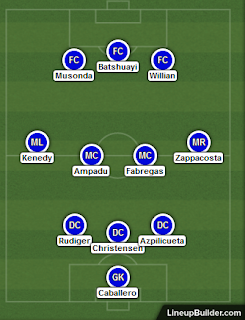 Chelsea vs Everton Head to Head

These two sides have met on some 177 occasions, and it is Chelsea who have taken most of the spoils with 71 wins to 54 (52 draws).

In the modern era – let’s say the past decade, Chelsea’s formline against the Toffees reads W14 D7 L7, although we note that Everton haven’t won at Stamford Bridge in seven attempts (W6 D1 L0).

Oddly, Everton have won two of their last three cup matches against the Blues, so the history books offer few clues as to how this one will go.

There are two obvious discussion points governing this match: how strong will the team be that Antonio Conte puts out, and how will the Everton players react to the departure of Koeman.

As far as the first point goes, you can see from the image above how we think the Blues will line up. It’s a decent side, although you would worry about Ethan Ampadu on his first Chelsea start up against a Toffees side that has routinely played four central midfielders in their starting eleven this season.

Fans of 90s football will remember David Unsworth as being a fairly uncompromising centre back, although the suggestion is that he is rather more dynamic and progressive as a manager. He has led the club’s Under 23 side for a number of years, and helped to produce a number of talents that have or are just starting to break into first team plans.

We would expect some kind of a reaction from the Everton players, too. It became apparent in Koeman’s last weeks as Toffees boss that the players weren’t exactly rooting for their manager, and so often a change is as good as a rest. As an old-school Scottish centre half, Unsworth won’t take any prisoners.

We’d hope that Batshuayi would continue his fine form on Wednesday, and that players like Willian – who is still yet to nail down a guaranteed first team place – would come to the party and show Conte exactly what they are about.