Ah yes, the fickle nature of football. Less than a week after ‘speculation’ about Antonio Conte’s job, amid rumours of a ‘rift’ with the players, Chelsea respond in the best way possible by claiming two wins in the space of four days.

Really, we should know better than to give any credence to the tabloid twaddle, but there were signs that Conte was feeling the heat at the Bridge. A few subtle digs at the chairman haven’t helped as injuries mount, and the frustration that the Italian has been feeling has been evident in his demeanour and strange grey-ish pallor on the touchline.

The last thing we needed was a potential banana-skin against Watford on Saturday then, but the players responded to Conte’s prompting, and if not with flying colours they did at least pass this latest test of their credentials.

The Carabao Cup could be construed as a nuisance, rather than having any actual value to those involved, and we all have differing opinions on that. Conte’s viewpoint, judging by his team selection against Everton on Wednesday, is one of general indifference.

Even so, he must have been delighted that his side were able to pick up the win. Goals from Rudiger and Willian did the job against a spirited Everton performance, who seem to have a bit of fire back under caretaker boss David Unsworth. It was excellent to see young Ethan Ampadu make his first start in a blue shirt, and an assured performance from Danny Drinkwater, slowly working his way back to full fitness, was the icing on the cake.

Saturday teatime’s trip to Bournemouth can be made with relish then, and hopefully another winning performance can afford Blues fans the perfect excuse to toast another three points on the south coast.

The good news is that the treatment room is clearing. Drinkwater’s hour-long cameo confirms that he is nearing full fitness, and that’s a fantastic fillip given the ongoing injury problems to N’Golo Kante.

The prognosis is good for the diminutive Frenchman, however, who has returned to light fitness work and should be fit for the Manchester United game on November 5.
Victor Moses’ return date is a little more open ended, and so we will have to wait on further updates to his condition.

Otherwise, it’s all hands on deck for Conte ahead of the trip to the Cherries. 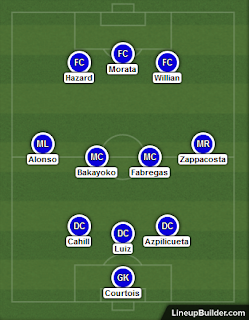 Bournemouth vs Chelsea Head to Head

Chelsea vs Bournemouth is not an especially storied rivalry given that the Cherries’ development as a top flight side has only come in recent times.

As such they have only met seven times in the past, with four of those encounters coming after the turn of the Millennium.

At least the Blues boast a strong record against the south coast outfit, with three wins and one defeat since Bournemouth ascended to the Premier League. Especially pleasing is the nature of those three triumphs, which have all come in the last trio of meetings, with scorelines ending 3-0, 3-1 and 4-1.

Confidence in the Bournemouth camp must be shot to pieces at the moment with six defeats in nine this term, and if Chelsea can withstand a pressurised first ten minutes or so they should be able to kick on with aplomb from there.

You can see it now: a televised game on Saturday evening, a lively home crowd after an afternoon spent in the various hostelries of the area, and a fast and frenetic approach. Yep, the Cherries will be a handful in the early going, but if we can keep them quiet and silence the fans then we expect Chelsea’s quality to shine through as they grab a foothold in the game.

Bournemouth have kept just one clean sheet this season, and with Jermain Defoe on the treatment table their attacking options are severely limited too. They are there for the taking on Saturday.

Their record against the ‘big six’ since the start of last season reads W1 D4 L10, and so clearly they struggle to contain elite-level opposition. There may even be a crisis of confidence too – the Cherries climbed up the league ladder at a rapid rate – with players suffering from low self-esteem when tackling the top boys. That might sound naff, but how else can you explain that poor run against the big six.

So, like we say, weather that early storm on the coast and Chelsea should be able to ease themselves into the game. From there, they will be a heavy favourite to go on and make it three wins on the spin.
Email ThisBlogThis!Share to TwitterShare to FacebookShare to Pinterest