Chelsea vs Watford Match Preview (21/10/17): Blues To Take the Sting Out of Hornets

Embed from Getty Images
While for the neutral the 3-3 draw between Chelsea and Roma must have made for outstanding viewing, for Blues fans themselves it was rather more of a frustrating spectacle.

Things looked set go swimmingly when David Luiz put us in front with a stunning strike in the eleventh minute, and when Eden Hazard doubled the advantage we really should have closed the game out from that point on.

But the Italians scored three times in a 30 minute spell either side of the break to take the lead, and the looks of exasperation on Chelsea fans’ faces told the whole story.

Eden Hazard did equalise shortly after, and the good-feeling that Chelsea fans had courtesy of that late goal was enhanced yet further with the news that Atletico Madrid had been held to a goalless draw at Qarabag.

So the overall result of Wednesday evening is, arguably, one of positivity: Chelsea should really romp into the last 16 from here. But to look at the minutiae – we were staring down the barrel of a third consecutive defeat at one point, which would have been the first time since 2006 that we would have suffered the fate. We’re conceding goals liberally, and to make matters worse Conte hinted after the match that both David Luiz and Tiemoue Bakayoko picked up knocks.

So it’s less than ideal then that we have to take on a Watford side buoyed by their own 2-1 victory over Arsenal last time out. Hopefully Conte can summon up a decent (and fit) starting eleven, because we might just need it against the buzzing Hornets on Saturday.

"When we changed in the second half the situation was changing. David Luiz had a little problem in his calf and in this moment I can't risk my players, we are playing always the same players."

Those were the post-match words of Conte, and whether his substituting of the Brazilian was just precautionary or the sign of something more sinister, we could really do with him on the pitch at the weekend.

Luiz was deployed as a makeshift midfielder against Roma, but against Watford he would presumably slot back in at centre half, with Cesc Fabregas dropping deeper and either Pedro or Willian coming into the side. That’s assuming that he is fit, of course.

The fact that Bakayoko played the full 90 suggests his condition is manageable, while Hazard and Davide Zappacosta were taken off for tactical reasons rather than anything else.

So the only confirmed absentees are Victor Moses and N’Golo Kante, with Danny Drinkwater back in training but a month or so away from pulling on the blue shirt for the first time. 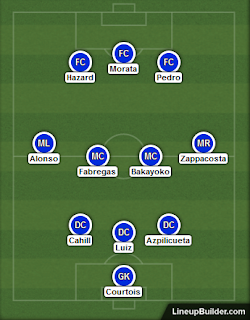 Chelsea vs Watford Head to Head

Watford might be buzzing at present but they still have a terrible head-to-head record against Chelsea to overcome.

The Blues are unbeaten in 12 in all competitions against the Vicarage Roaders, winning nine of the dozen. Indeed, Chelsea have only lost once to Watford in 17 encounters dating back to 1987!

The Hornets’ last win at Stamford Bridge came back in the old Division One in 1986 – otherwise, Chelsea’s home record reads W6 D4 L0 since and W3 D1 L0 from 2010 onwards.

Watford are performing manfully at the moment given their list of absent defenders: Prodl, Cathcart, Kaboul, Hoban and defensive midfielder Nathaniel Chalobah are all waylaid by injury.

So a few expected Arsenal to breach their backline more than just once last Saturday, and the fact that Heurelho Gomes in the Hornet’s goal was named Man-of-the-Match perhaps speaks volumes. The stopper had six shots to deal with as the Gunners arguably dominated proceedings before going down to a late penalty.

That’s why Chelsea must be bold and attack with gusto on Saturday: a Watford back three of Adrian Mariappa, Christian Kabasele and Miguel Britos is, frankly, there to be got at.

Roberto Peyrera and Richarlison will provide lively competition in Chelsea’s final third, and the pace of Andre Gray will need to be well-marshalled – expect David Luiz to play a little deeper as an old fashioned sweeper to deal with balls into the channel.

The stats would suggest that Watford’s best work has come away from home this term – which may suggest a penchant for a counter attack or two. They’ve picked up ten points from a possible twelve on the road, although a kind fixture list of Bournemouth, Southampton, Swansea and West Brom highlights perhaps something of a charmed life for Marco Silva’s men so far.

So, what do we know? We know that Chelsea will provide Watford’s sternest away test of the campaign, and that they are missing a number of key defensive players. If the Blues are fit and start quickly on Saturday lunchtime, there’s no reason why they can’t take the sting out of the Hornets in convincing fashion.
Email ThisBlogThis!Share to TwitterShare to FacebookShare to Pinterest