Once again, Chelsea have proven the benefit of relying on European players over their South American or African counterparts.

While the latter groups have been off to all corners of the globe during the international break, the Europeans have been plying their trade close enough to our London base.

Indeed, our only South American on international duty, Willian, played for Brazil against Cameroon not at the Maracanã, oh no, but at the home of sexy football: Milton Keynes’ Stadium: MK!

It really is an advantage to have the majority of your squad on the continent in what feels like an increasing number of international breaks. No jet lag, no hours lost sat on planes, and more time spent on the training ground working on tactics for the game ahead.

And what a match we have in store: a trip to Wembley to take on Tottenham on Saturday evening.

Spurs are beset by injury problems, with Jan Vertonghen and Mousa Dembele definitely out and Davinson Sanchez, Kieran Trippier and Danny Rose all struggling to some extent to be fit in time.

That’s great news for us, naturally, and the thought of playing a top-four rival without a quartet of key defenders and their midfield general is pleasing indeed!

As mentioned, it was a good international break from Maurizio Sarri’s perspective.

Kepa, Cesar Azpilicueta and Alvaro Morata all played less than 90 minutes in Spain’s 1-0 win over Bosnia-Herzegovina on Sunday, while Marcos Alonso didn’t even get the call-up.

David Luiz is also being overlooked by Brazil at present, with Willian barely leaving the capital while representing his country.

Antonio Rudiger played a full part for Germany as their Nations League campaign ended in disappointing fashion, but he should hopefully have recovered fully from Monday’s 2-2 draw with Holland come Saturday.

N’Golo Kante and Olivier Giroud were both involved for France, but the extent of their travel is getting back from Paris, so again no headaches there.

Jorginho played for Italy in the 0-0 draw with Portugal on Saturday, but was subsequently rested for the friendly victory over the USA on Tuesday.

Ross Barkley was subbed off after an hour of England’s triumph over Croatia, and the only other worry is Eden Hazard, who played 90 minutes in Belgium’s shock 2-5 defeat at Switzerland on Sunday.

All of the above could start against Spurs, with the only confirmed absentee being Mateo Kovacic. He picked up a muscle strain in training while on Croatia duty, and will miss out on the Wembley trip. 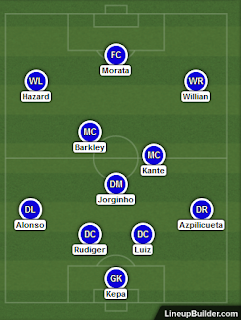 Fixtures in English football don’t come much more storied than Chelsea vs Tottenham.

It’s a rivalry that extends beyond mere geography to pride and prestige; our 2-2 draw with Spurs back in May 2016 ultimately costing them a chance of winning the Premier League title.

Our formline against our London rivals is a mixed bag, although we do still come out on the positive side of a W5 D2 L3 run.

It could be a case of two attacks getting the better of their opposition’s defence here.

The historical data shows that goals tend to follow when these two teams meet, and given Spurs’ defensive injury woes we have no reason to suggest that the Blues won’t flourish in the final third.

Particularly interesting is Eden Hazard’s record against our capital rivals: in 13 matches against Tottenham, the Belgium has scored five times, assisted four more and enjoyed a win ratio of 46%.

Mind you, the naysayers will point to our record against the other ‘big six’ teams this term and be lining up to criticise our defensive record. We shipped two each against Arsenal and Manchester United, and another against Liverpool.

That means that 63% of the goals we have conceded in the Premier League have come in that trio of games; we’ve shipped just three in nine against non-elite sides.

The takeaway point is that we have tended to struggle defensively against the best operators, and if Kane, Eriksen and Alli are fit then we can put Spurs in that bracket.

So how will Saturday’s game unfold? You might see two teams trying to outscore each other, if the stats are to be believed. Given Tottenham’s injury woes, we’d certainly like to think that Chelsea can nick all three points.
Email ThisBlogThis!Share to TwitterShare to FacebookShare to Pinterest