BATE Borisov vs Chelsea Match Preview (08/11/18): Blues to Advance in Style in Belarus

We had wondered in last week’s preview of the Crystal Palace game just how long it would take us to make the all-important breakthrough.

Half an hour or so, all told, when Alvaro Morata – confidence seemingly returning – slotted home from Pedro’s pass.

But as we predicted, this was not an easy game, with the Eagles making life plenty difficult for us despite our overwhelming occupation of the ball.

Roy Hodgson’s side drew level in the second half when Andros Townsend got clear and fired home impressively, and at that point we really did need some divine intervention to find that second goal.

It came from the garden of Eden – well, his right foot actually, as Hazard’s introduction from the substitute’s bench brought an instant return. His free kick eventually found its way to Morata, who drilled home.

We managed to complete the scoring when Pedro finished so emphatically from Marcos Alonso’s pass, and while it was tremendously hard work we still found a way to claim all three points against a stubborn Palace side. Victory took us above Liverpool on goal difference, and two points adrift of leaders Manchester City.

Our next Premier League outing comes on Sunday when we entertain Everton in the last game before the next international break, but prior to that there’s the matter of a trip to Belarus on Thursday to take care of.

A point or better against BATE Borisov will secure our passage into the knockout phase of the Europa League, and you sense that Maurizio Sarri will be desperate to clear that particular bridge at the first available opportunity.

The manager has continued to field strong sides in this competition, and while he will surely take it easy with some there will still be game time for others.

Kepa has typically been the first choice keeper in the Europa League, so he may well start behind the rotated back four of, from right to left, Zappacosta, Christensen, Cahill and Emerson.

Getting the balance right in midfield will be key, and the fact that Ross Barkley was subbed off after 64 minutes suggests that either he or replacement Mateo Kovacic will join Cesc Fabregas and Ruben Loftus-Cheek in the middle of the park.

Will Sarri treat Hazard with kid gloves? There’s no real reason for him to start against BATE, and while he is likely to travel with the squad you would wager that Pedro and Willian are better options unless the Belgian’s skills are needed to break the deadlock late on.

Up front, the manager has a tough decision to make. Does he continue with Morata, who is starting to get among the goals again and who will want to keep his hot run going, or bring in the fit-again Olivier Giroud? 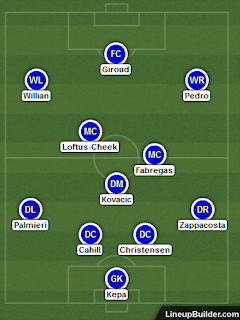 Chelsea’s 3-1 win over BATE Borisov a fortnight ago was the first meeting between the two sides.

Ruben Loftus-Cheek’s hat-trick did the damage in a match in which we won the shots on target count by a commanding 9-1.

There wasn’t a huge amount about BATE Borisov at the Bridge the other week that suggests we need to be fearful ahead of the meeting in Belarus on Thursday.

They tried to pass the ball around, but lacked the class to really make any inroads into our defence, and but for a bit of luck and some tigerish defending our 3-1 margin of victory would surely have been greater.

The boys from Belarus lined up in a compact 4-3-3, with former Arsenal man Aleksandr Hleb the focal point in the middle of the park.

In truth, they were simply trying to limit the damage by going man for man in the middle of the park, and it remains to be seen if they adopt a more progressive, front foot approach on home soil.

They were stuffed 1-4 by PAOK in their other home match in Group L so far, and so perhaps we need to focus less on them and more on what we do!

The great thing about this Chelsea squad is that even with rotation, it’s still a tremendously strong set of players.

The back four is strong, and a midfield three of Kovacic, Fabregas and Loftus-Cheek is strong enough to grace any side in the Europa League.

Goals are not in short supply regardless of the front three Sarri names, and so the only conclusion we can draw is that Chelsea should win this game with the same level of comfort with which they triumphed in the reverse fixture.
Email ThisBlogThis!Share to TwitterShare to FacebookShare to Pinterest