Swansea vs Chelsea Match Preview (28/04/18): Blues to Keep Pressure on Spurs in Race for Fourth

Embed from Getty Images
There is a chance of redemption for Chelsea this term after Sunday’s 2-0 win over Southampton booked our spot in the FA Cup final.

Getting your hands on some silverware is always nice, and with aspirations of finishing fourth in the Premier League being filed under possible rather than probable, winning the FA Cup may also prove to be the perfect swansong for Antonio Conte as Chelsea manager.

It’s been fairly obvious that the Italian has been unhappy in London for several months now, and with media speculation intensifying it is unlikely that he will be at the helm at the start of next season.

Indeed, with Massimiliano Allegri tipped to join Arsenal from Juventus, it’s quite possible that Conte may find himself back in Turin this summer.

We don’t like to dignify mere rumour and tittle-tattle usually, but if rumours of Conte leaving the club are true then at least he has one last chance to get one over on his old nemesis, Jose Mourinho, with the Blues meeting Manchester United in that May 19 final.

It was courtesy of a fine goal from Olivier Giroud – how good has he been recently by the way!? – that we booked our Wembley date at the expense of Southampton. The Frenchman weaved his way through the Saints’ defence to fire home and break the Saints’ hearts once more; he was the catalyst for our 3-2 win on the south coast a couple of weeks ago after trailing 1-2.

Alvaro Morata came off the substitutes bench to net a second and secure a comfortable 2-0 win for the Blues.

Attention turns back to the Premier League this week with Saturday’s tea-time trip to Swansea. We can still finish fourth, even if the chances are slim, and so we must continue to accumulate points in the hope that Spurs slip up in the last few weeks of the campaign – it wouldn’t be the first time….

It would seem that the experiment with two strikers has been jettisoned, and so you would expect the in-form Giroud to lead the line ahead of Morata on Saturday.

There’s no obvious reason to rest players, so Eden Hazard and Willian will surely start along with N’Golo Kante, Cesc Fabregas and Victor Moses. Emerson will presumably deputise for Marcos Alonso once more.

Thibaut Courtois returns between the sticks, and so the only real decision Conte has to make is between Gary Cahill and Andreas Christensen at centre back. For now, it appears the Englishman has the Italian’s support. 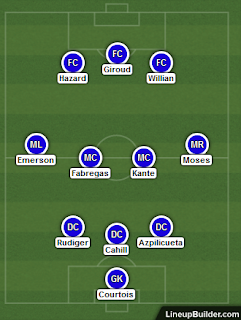 Swansea vs Chelsea Head to Head

Chelsea have a reliably good record against the Swans, losing just one Premier League game against them since the Welsh side reached the top flight in 2011.

That equates to a formline of W8 D4 L1 in league outings since, and that should give Conte something to be cheerful about.

We won the reverse fixture 1-0 back in November courtesy of Antonio Rudiger’s goal, with Conte sent to the stands after a particular fractious afternoon.

Swansea have become much more resolute under Carlos Carvajal, and a formline of W4 D5 L4 since the start of 2018 confirms that they are tough to beat even if they are not prolific winners.

The concern for the Swans is that they have been victorious just once in seven attempts, and that has dragged them back into the relegation mire. The pressure is firmly on them come Saturday.
That should lead to a fraught and nervy atmosphere at the Liberty Stadium, and that is the perfect setting for a Chelsea smash-and-grab raid.

The Swans are the joint-lowest scorers in the Premier League this term, and that mans that we can expect to have plenty of the ball on Saturday. The Welsh side don’t press high or assert themselves on the game – indeed, they enjoyed just 17% possession of the ball against Manchester City last time out. They are a passive, counter-punching outfit….and that suits us down to the ground.

Swansea will actually match us man for man too, with three centre halves, wing backs, two central midfield players and then a couple of inverted wide men supporting a lone striker. And so this will be a game of individual battles; but who will win the war?

The physical confrontation between Giroud and Alfie Mawson will be one to behold for fans of old-fashioned clashes between rugged strikers and defenders, but it’s actually Eden Hazard and Willian who interest us the most.

That dynamic duo can play wide of Swansea’s midfield pair and force the Swans’ centre halves out of position; that will leave plenty of space in behind.

Unless the Welsh side surprise with their tactics and attacking demeanour, this match surely has a Chelsea victory writ large.
Email ThisBlogThis!Share to TwitterShare to FacebookShare to Pinterest