Chelsea vs Liverpool Match Preview (06/05/18): Blues to Cash In On Hungover Reds?

Embed from Getty Images
We are doing everything in our power to secure a Champions League spot, and while the likelihood is that Spurs – who are five points clear with just three games to go – are the most likely to nab fourth place, we at least have to hold up our end of the bargain by keeping the pressure on.

And three wins on the spin does exactly that. Our latest victims were Swansea in a nip-and-tuck contest that arguably could have gone either way, but Cesc Fabregas’ early goal was ultimately enough to separate the sides.

It was our third consecutive away win – the first time since September we’ve managed that feat, and the game marked the continued resurgence of Eden Hazard, who looks somewhere close to his best at the minute. He was given a free role behind Olivier Giroud and ahead of a midfield trio of Fabregas, N’Golo Kante and Tiemoue Bakayoko, and it seemed to bring the best out of the Belgian, who caused havoc in the Swans backline and assisted Fabregas’ winner.

“We got three points and it was very important for us if we wanted to achieve Champions League football,” Antonio Conte said in his post-match interview. “The situation is not in our hands, but the only way to put a bit of pressure on Tottenham is to get three points in every game.

“You know very well football is not simple.”

We can have plenty of confidence ahead of Sunday’s clash with Liverpool then, who may well be experiencing a headache after the colossal celebrations that greeted their Champions League semi-final win over Roma on Wednesday.

With injuries in midfield, the possibility of their minds being elsewhere and less than four days to recover from their trip to Italy, the Reds may well be ripe for the picking.

It’s a case of same old, same old for Conte, with David Luiz, Danny Drinkwater and Ethan Ampadu still on the sidelines.

Indeed, the Italian has just two decisions to make: does he bring Marcos Alonso back in at left wing back after his suspension? Emerson has done a fine job as understudy, so that is a conundrum for Conte to solve.

And he must also decide whether to stick with the 3-5-1-1 shape he has deployed against elite opposition this term (and Swansea), or return to his favoured 3-4-3 set-up. Given the quality of the opposition, we would suggest the latter might be the smart choice. 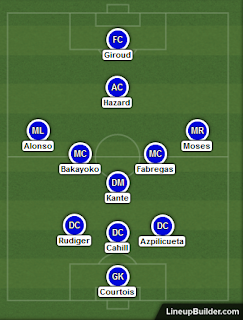 Chelsea vs Liverpool Head to Head

There have been more than 175 meetings between Chelsea and Liverpool dating back to Christmas Day, 1907!

Historically Liverpool have had the upper hand with 77 wins to 61 (44 draws), and that’s a theme which has largely been extended to the modern era.

Chelsea are without a win in six against the Reds, a run which dates back to January 2015. That includes a trio of win-less outings at Stamford Bridge (W0 D1 L2)

The reverse fixture ended in a 1-1 back in November, with Willian’s late equaliser cancelling out Mo Salah’s opener.

Anyone that has paid even a passing interest in English football this season will know that Liverpool have been in outstanding form from an attacking perspective this term.

But there are certain frailties defensively, particularly at centre half, and we have seen Dejan Lovren bullied by physical strikers like Harry Kane and Romelu Lukaku this season. It will be interesting to see if Giroud can have a field day against the Croatian.

The Reds will sit back in numbers and then counter attack at pace, which is when they are at their most dangerous. Their most obvious threat comes in wide areas, with Salah and Sadio Mane their main outlet. Both are wide men who like to cut inside on their stronger foot, and so a Chelsea midfield three could help to fill those pockets of space as the Egyptian and the Senegal international drift inside.

With Alex Oxlade-Chamberlain and Adam Lallana injured, minimal threat will come from the middle of the park.

We’re hoping that Giroud can isolate himself against Lovren and bully the defender, with Eden Hazard buzzing around him to feed on the scraps. Our wing backs will need to have had their Weetabix too, playing a key role in attack (landing crosses on the bone of Giroud) and defence (minimising the space available to Salah and Mane).

It’s a game of tactical contrasts, and that should make for a fascinating encounter at the Bridge on Sunday.
Email ThisBlogThis!Share to TwitterShare to FacebookShare to Pinterest