Chelsea vs West Ham Match Preview (08/04/18): Blues to Bounce Back in Battle of London

Embed from Getty Images
Once again, Antonio Conte is left picking up the pieces following a performance that promised so much and yet delivered so little.

We went one-nil up against Tottenham on Easter Sunday, and for that first half-hour or so we were very comfy indeed. The breakthrough finally came when Victor Moses’ precision cross was headed home by Alvaro Morata, who will surely take great confidence from finding the net in such a big game.

We went hunting for a second too, and Marcos Alonso had a decent drive saved by Hugo Lloris.
With the Blues on top, it was only natural that Tottenham would pluck a goal out of thin air and completely against the run of play. Christian Eriksen’s dipping strike showcased his extraordinary shooting technique, but also rather changed Conte’s team talk somewhat that the equaliser came in first half injury time.

Quite what happened in the second half is anybody’s guess, but to cut a long story short Spurs dominated the second period and scored twice more courtesy of Dele Alli. That was our fifth defeat in seven Premier League outings.

Our hopes of finishing in the top four are fading with each passing week. We’re now eight points behind Tottenham with a maximum of 21 still to be won, and so we’re relying on them to drop points – and us to have a near-enough perfect run to the end of the campaign, to make our Champions League hopes a reality.

We simply have to bounce back in Sunday’s tea time game against West Ham. They will be bouncing after trouncing Southampton last time out, and the prospect of claiming a big scalp will appeal greatly to their under-fire players.

Let’s just hope the Chelsea players realise how important this match is; both to us as supporters and to their own futures in a blue shirt.

There are four players in the Chelsea squad who, at this moment in time, are considered as 50/50 hopes of making Sunday: Thibaut Courtois, Pedro, Davide Zappacosta and Ross Barkley.

Courtois’ niggling thigh injury is still causing him concern, while Pedro and Zappacosta have knocks which have kept them out of full training. Barkley’s torrid campaign continues; he is simply short of match fitness.

Two who definitely won’t feature on Sunday are David Luiz and Ethan Ampadu. The Brazilian is hoping to return at the end of April from his ankle injury, while Ampadu is out for the season with a broken ankle.

Otherwise there are no tactical considerations for Conte to make, as West Ham require no special treatment. The Italian must pick what he perceives to be his strongest eleven here. 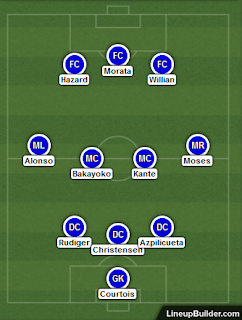 Spurs showed last week that years of poor form at Stamford Bridge can be overturned in a single afternoon, and West Ham will need something similarly hoodoo-breaking this Sunday.

The Hammers’ last win at the Bridge came in September 2002, and in the 12 contests that have occurred since we have won nine of them, with three draws.

Readers of a betting persuasion will note that five of the last six meetings between these two teams have witnessed both teams scoring and three or more goals.

One of the main problems for West Ham is that they don’t have a clear identity at the moment. Are they a thrilling attacking side….or one who wants to grind out results? It’s difficult for David Moyes, who has had to deal with a lengthy injury list, but even so you sense that the Hammers are meandering at the moment.

They had lost three on the spin prior to their pasting of the Saints last week, but even then they needed a motivated performance from Marko Arnautovic to get over the line. The Austrian was formerly managed by Mark Hughes at Stoke, and after their relationship became rather bitter it can be noted that Arnautovic has scored three in his last two games against Hughes-led teams.

Otherwise, where does their spark come from? Michail Antonio and Andy Carroll are injured, while Manuel Lanzini is battling a knee complaint of his own. Captain Winston Reid and defensive stalwart James Collins are also on the list of absentees.

The Hammers are without a recognised centre forward at present, and have young Declan Rice playing at centre back.

Really, there should be no excuses: Chelsea have to win this game….and they have to win it well.
Email ThisBlogThis!Share to TwitterShare to FacebookShare to Pinterest