Southampton vs Chelsea Match Preview (14/04/18): Blues Must Stick to Principles to Shoot Down Saints

Embed from Getty Images
“I think with this game we can see our season. We can create a lot of chances, but we cannot take them. We are not clinical and then we concede two shots and concede a goal.

“When you don't score but create the chances it's very difficult to win. This game explains our season.”

Those isolated sentiments from Antonio Conte in the immediate aftermath of the 1-1 draw with West Ham sum up the match quite nicely, and as the Italian suggests it was 90 minutes that represented the last eight months in microcosm.

The Blues recorded 23 shots at goal, had two Alvaro Morata strikes ruled out and were stopped by a heroic performance in the Hammers’ goal from Joe Hart, who surely hasn’t played as well as that in quite some time.

Opponents raising their game against the defending league champions….that’s not a new phenomenon, but it has certainly been the case this term that Chelsea have found themselves up against opposition with a tangible determination to get a positive result against us.

On another day we would have beaten West Ham two or three-nil, and that’s why we hope that Conte sticks to his guns and shows faith in those who started against the Hammers, because you sense a really heavy victory in just around the corner.

This week’s opponents Southampton are deep in the relegation doo-doo, and with a three-point gap opening up to Crystal Palace they will need to force the issue here. If we can dominate possession, as we did against West Ham, then they will become desperate ad start throwing more bodies forward – that won’t harm our chances one bit.

A good win on the south coast re-energises our top four bid, and we look well placed to achieve exactly that.

We have made the case for an unchanged Chelsea line-up, and you wonder if Antonio Conte will have the same thought-process.

He has said for a while now that Andreas Christensen needs a rest; given the maturity of his performances it is easy to forget how young he is, and also that this is his first full campaign as a Premier League regular. One more game on the sidelines won’t hurt the Dane.

It would appear as if Cesc Fabregas has confirmed himself as N’Golo Kante’s first choice midfield partner ahead of Tiemoue Bakayoko and Danny Drinkwater, while Alvaro Morata’s encouraging displays have earned him a starting role up front ahead of Olivier Giroud.

Our confirmed absentees include David Luiz, who is thought to be a week or so away from a return, Ross Barkley and Ethan Ampadu, while Davide Zappacosta could be fit enough for a place on the bench. 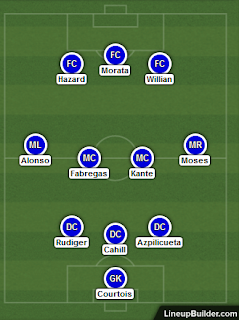 Southampton vs Chelsea Head to Head

We have won four games on the spin against Southampton, notching two goals in our last pair of visits to the south coast.

That has helped to right an otherwise dicey spell of form against the Saints; between January 2013 and October 2015 our formline read W2 D3 L2.

In the reverse fixture back at Stamford Bridge back in December, Marcos Alonso’s solitary goal was enough to secure a 1-0 victory.

Southampton showed plenty of fighting spirit - as you would expect from a Mark Hughes side - on Sunday despite going down in defeat to Arsenal, but they have shipped six in two and that must be of grave concern. The absence of suspended Jack Stephens here won’t help matters.

But the Saints have welcomed back Charlie Austin from injury – he scored against the Gunners last time out – and so at least they have a goal threat.

Hughes has deployed a cagey 3-5-1-1 formation so far in his tenure at the club, but as the Grim Reaper edges closer to their hopes of Premier League survival, you wonder if he will soon start committing more bodies in attack.

We won’t deviate from our normal strategy of course, and so the key battle will be in the wide areas where Victor Moses and Marcos Alonso will compete directly with Cedric Soares and Ryan Bertrand. Those individual dust-ups could hold the key.

The middle of the pitch will be congested, so if Eden Hazard and Willian can play wider they are likely to enjoy more space; and create dangerous two-on-one opportunities against those aforementioned wing backs.

The Saints typically deploy some physically tough centre backs, so Alvaro Morata will need to be at the races. Crosses into the box should be delivered at pace and a lower trajectory.

At the other end of the pitch, Charlie Austin can’t hurt you in behind as he has no discernible pace, but he comes alive in the six-yard box ad so we must cut off his supply; most likely to come from Dusan Tadic and James Ward-Prowse.
Email ThisBlogThis!Share to TwitterShare to FacebookShare to Pinterest