Chelsea vs Southampton Match Preview (22/04/18): Blues to March On at Expense of the Saints

Embed from Getty Images
We remain, by hook or by crook, in the picture for fourth place in the Premier League.

The trip to Burnley on Thursday night was never going to be an easy one, but the lads did well to claim a 2-1 win in a slightly unfamiliar 3-5-2 system, which saw Olivier Giroud and Alvaro Morata paired up front.

The former was excellent once again, his physicality causing the Clarets all manner of problems. The latter was less so, and he showed his frustration when substituted after 70 minutes.

Nevertheless, Conte was pleased with his strike pairing. “They showed a great link and a great combination and at the same time they worked very hard for the team,” he said.

“They played a fantastic game with and without the ball. The whole team played an intensive game. We deserved to win.”

The players could have been forgiven for having one eye on Sunday’s FA Cup semi-final against Southampton, but they showed great character to claim all three points at Turf Moor – never an easy place to go, to coin the mother of all footballing clichés – and close the gap to Spurs in fourth to five points.

The FA Cup is a welcome distraction, of course, and the chance for the boys to get their hands on some silverware. We have to be wary of Southampton, a team for whom this game is so important given their league status, but on a fine day at Wembley we really ought to be booking our spot in the final.

The big question really is will Conte play two up front again? He was clearly impressed with the pair of them, but mainly it was a vehicle that enabled Willian and Eden Hazard to have a rest. You would anticipate both of those guys will come back into the side.

Also impressive were the full backs: Victor Moses and Emerson. The former toe-poked home the winner and was a constant threat all evening, while the latter looked assured both in defence and attack on his Chelsea debut.

Conte has two other big decisions to make: does Andreas Christensen come back in? The boss may opt for the greater experience of Gary Cahill. And in goal….does he stay loyal to ‘cup keeper’ Willy Caballero, or does Thibaut Courtois come in? 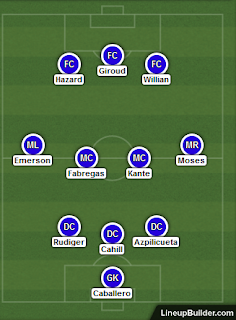 After the 3-2 win at St Mary’s a week ago, that’s five straight victories for Chelsea over Southampton.

It also secured a double of victories over the Saints this term, and my how we’d like to make it a hat-trick on Sunday.

The last time we met in the FA Cup was back in January 2013, when Demba Ba scored twice as part of a 5-1 triumph.

It took an Olivier Giroud masterclass to turn around the fixture when we last met a week ago, and Conte will be hoping he doesn’t have to resort to Plan B here.

Southampton put in a decent display on Saturday, with Mark Hughes’ 3-5-1-1 formation nullifying much of our good work. The Saints went 2-0 and fully deserved it, but the points aren’t dished out after 60 minutes and the desire Chelsea showed in that last half-hour deserved to get something from the game.

One of the factors from the first game was that the Saints won the battle in wide areas, with messrs Bertrand and Cedric getting the better of Zappacosta and Alonso. Happily, we’ll presumably have a completely different pair in Moses and Emerson to try and assert some authority in wide areas on Sunday.

Southampton really struggled to cope with the physicality of Giroud, and that’s the main reason you’d expect to see him operating through the middle in this FA Cup semi-final, with Eden Hazard and Willian instructed to float into the pockets of space behind the wing backs.

The midfield battleground will again be crucial and there are likely to be some bodies in there: at least three from the Saints, and N’Golo Kante alongside Cesc Fabregas. It will be congested, and with so much at stake there might just be a few tackles flying in.

How will the game be won? We need to be compact through the middle, and the marauding runs of Dusan Tadic must be monitored. If we can knuckle down on set pieces, then clearly we have more weapons at our disposal to win this cup tie and book yet another FA Cup final date for the diary.
Email ThisBlogThis!Share to TwitterShare to FacebookShare to Pinterest