Embed from Getty Images
The international break is a time of much nervousness for managers of elite sides who have global stars jetting off here, there and everywhere during the enforced lay-off.

And Antonio Conte can be forgiven for chewing his nails down to the quick as he sits by the phone hoping it doesn’t ring to inform him of any injuries.

Andreas Christensen returned home early from the Denmark squad complaining of tiredness – he’s been able to put his feet up for a few days since.

Thibaut Courtois wasn’t fit enough to make the squad against Leicester in the FA Cup last time out, and he withdrew from the Belgium squad with the same hamstring strain. The good news is that he should be fit to start against Spurs on Sunday.

Elsewhere David Luiz, Ross Barkley and Ethan Ampadu are definitely out, but otherwise the early signs are that there are no new injury worries for Conte to concern himself with.

And that’s refreshing ahead of Sunday’s clash with our London rivals, who themselves have been hampered by the injury to Harry Kane. His absence makes our job much easier, let’s be honest, and knowing that Tottenham haven’t won at Stamford Bridge since 1990 is also a handy confidence booster.

Victory for the Blues here will close the gap to Spurs in fourth to just two points, and in a day-and-age where finishing fifth is finishing nowhere, there can be no greater motivation for a side seeking a timely boost heading into the business end of the campaign.

We’ve already identified the key injury concerns, and assuming that both Courtois and Christensen are fit to start we will be at full strength on Sunday.

And so the main decisions for Conte will be tactical, and on that front he has been given a boost by an interview that Eden Hazard gave Sky Sports News.

When asked if he minded being played out of position – Conte has opted to start the Belgian in a false nine role in big matches – he replied: “Number 9, 10, I can play left-back if the manager wants, no problem. I just want to be on the pitch and try to give everything like I do every time.

“I'm happy with Chelsea. I am just thinking about the end of the season and the World Cup. I have got two years left on my contract, so I am just happy.”

That’s a well-timed interview as far as Conte is concerned, because he will surely pack the midfield to cope with Tottenham’s main threat. That may mean, once again, that Hazard is handed an assignment to lead the line for the Blues. 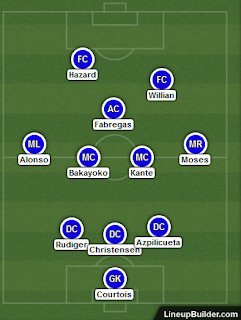 The head-to-head stats between Chelsea and Tottenham really do make for pleasant reading….if you are a Blues fan, that is!

Spurs have won just two of the last eighteen encounters with us, and indeed Chelsea have won three of the last four including an FA Cup semi-final and that all-important fixture in May 2016, where we ended their hopes of winning the Premier League title.

And the history buffs among you will know that Tottenham haven’t won at Stamford Bridge in 29 attempts!

That last stat is incredible really, and while it can only be treated with a pinch of salt given the fast-moving world of football and the turnover of players and staff, and yet it covers such a long period of time that it really does have to be given some credence.

Also important is Harry Kane’s absence. Let’s not beat about the bush here: the England man is a world-class talent, and more pressing for Spurs is that he has netted a whopping 41% of their goals this term. Mauricio Pochettino can play Fernando Llorente in attack or press Son Heung-Min or Lucas Moura into action through the middle; none of those options are particularly worrying for us.

Really, given the stats and the assumption that our squad returns fit and healthy from international duty, there is absolutely no doubt that we are a strong and worthy favourite at the Bridge.

How do you beat Spurs? You have to compete with them in midfield. They can have Victor Wanyama/Eric Dier, Mousa Dembele, Christian Eriksen and Dele Alli all operating in central areas, which you would think would contribute to Conte’s own team selection.

Tottenham aren’t invincible by any stretch, and the fact they have won ‘just’ 8/15 of their matches on the road in the Premier League this term tells its own story. We have beaten them countless times in the past few seasons, and there’s no reason why we can’t add to that tally on Sunday.
Email ThisBlogThis!Share to TwitterShare to FacebookShare to Pinterest