Chelsea vs Hull City Match Preview (16/02/18): Much-Changed Blues to Stand Up for Conte

Embed from Getty Images
Not for the first time this season, the Chelsea boys turned on the style when Antonio Conte needed it most.

With speculation mounting about the Italian’s future at the club, the players showed their support in the best way possible: routing West Brom 3-0 on Monday night, making a clear statement that they are fully behind the manager.

And the fans were unequivocal too: chanting Conte’s name from the first minute, the atmosphere at Stamford Bridge was as impassioned as it has been for quite some time.

An early goal from Eden Hazard settled any lingering nerves, and the Belgian added his second after half-time to go with a strike from Victor Moses. It was as comprehensive a win as it gets.

So the mood around the camp will have been much more positive this week, and that bodes well ahead of a run of two games in the space of five days at the Bridge.

The first, Friday’s FA Cup fifth round clash with Hull City, borders on the insignificant given what will follow on Tuesday evening: the first leg of our Champions League last 16 clash with Barcelona!

It would be easy to overlook the Hull match as a consequence, but keeping the momentum moving forward is essential for Conte and his players right now: winning breeds confidence, which is a commodity we have been lacking in lately. Let’s hope Friday night provides the players a platform to amend that.

The temptation from Conte would surely be to pick the same side as that which served him so well on Monday evening. But with the Barcelona game looming large, we have to expect the Italian to tinker with his side against Hull.

One player who will definitely be absent is Ross Barkley, who remains sidelined with a hamstring strain. Given it was the old hammy that caused him to miss the start of the season, caution is the watchword for the midfielder.

Thinking ahead to the Barcelona game, we suspect Conte will play his 3-5-1-1 system that sees Hazard tuck in behind a lone frontman. We suspect Alvaro Morata will audition for the role against the Tigers on Friday, given that Olivier Giroud left the pitch battered and bruised on Monday.

Willian and Pedro quite possibly won’t feature against Barca, so are free to play here, and they will probably be joined by Tiemoue Bakayoko: given a chance to shake off the hurt caused by his woeful performance against Watford.

Marcos Alonso, who has been struggling with an ankle injury of late, will surely be saved for the visit of the Catalan outfit on Tuesday. As such, new man Emerson Palmieri may just come in for his first start. 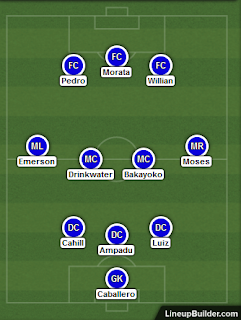 These two teams have met 46 times in a rivalry dating back to September 1905!

Chelsea won 5-1 that day, and that’s a theme that has followed ever since. The Blues have triumphed on 32 occasions, with Hull taking the spoils just four times.

In modern times the results have been staggering. Chelsea are unbeaten in fourteen against the Tigers, winning twelve of those including the last six on the bounce. Our last meetings came during the 2016/17 campaign, with both games ending 2-0 in the Blues’ favour.

So the Tigers will be looking to roar at the Bridge in what is, essentially, a free hit for them.

They are a young side too, which means there won’t be many nerves around in the camp, and so the Blues really must be on their mettle here.

The players can – and must – use this game as an audition for Tuesday’s contest with Barcelona. A good performance here and who knows? Perhaps they can force their way into Conte’s selection plans.

The key when playing lower-league sides in cup contests like this is to start well. If we can score early then all of the pressure that reverberates amongst the supporters, creating an unmissable frisson, evaporates. Then Hull will need to chase the game….and the Blues will be able to pick them off at will.

There’s absolutely no reason why Chelsea won’t win this match, but they will need to apply maximum effort to ensure an upset is avoided.
Email ThisBlogThis!Share to TwitterShare to FacebookShare to Pinterest