Embed from Getty Images
The rumour mill is suggesting that Antonio Conte has 90 minutes to save his job as Chelsea manager….let’s hope the players show him the commitment and character he deserves against West Brom on Monday night.

The 1-4 defeat to Watford was abject, dire, abysmal, shocking….any negative way you wish to describe it would be accurate. There is no legislating for just how bad we were; particularly Tiemoue Bakayoko, who can’t have put in a worse half-hour performance than that in his career.

He was sent off after 30 minutes, and while it is always tough to play with ten men against anybody you do request a certain level of effort – after all, the rest of the team has to make up for the deficit.

But the Blues played like they were a man light against the Hornets, and they paid the ultimate price.

It isn’t hard to draw parallels between this season and that of 2015/16, where after the celebrations of the title win the previous campaign a return to abject normality was painfully played out, costing Jose Mourinho his job.

The similarities will not have escaped Roman Abramovich either, of course, and the newspaper reports linking Jose Enrique to the manager’s job are rather cruel given that Conte is still in the hotseat.

This week’s clash with West Brom will be a true test. Will the Italian show the passion that was so beloved by Blues fans last term? Will the players stand up and be counted in the wake of their mentor’s criticism? We shall have to wait and see, and perhaps the Baggies are the worst possible opponent at this time. They will be aggressive and up for it, putting more pressure on the Chelsea players.

Nothing less than three points will be tolerated here….will the players have the ability and belief to make it happen?

There is something of a mini injury crisis sweeping through the club at present, and that certainly won’t help Conte in what is the most important game of our season so far.

Andreas Christensen and Marcos Alonso, both mainstays of this side, are struggling with strains and tweaks, and while the latter is expected to be fit for the contest with the Baggies it seems Christensen is fighting a losing battle.

Pedro hurt his ankle against Watford and was substituted, while Ross Barkley tweaked a hamstring in training and, given his injury record, is naturally being wrapped in cotton wool at the moment.

And then we come to Alvaro Morata, who’s back problem appears to be a chronic concern, rather than a one off. The only cure for such an ailment is rest, so who knows when we will see the Spaniard back in a blue shirt. 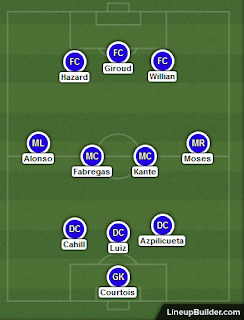 Chelsea have a reliably good record against the Baggies, so let’s hope the history books stay true and we earn a much-needed three points here.

We’ve lost just one of our last ten meetings with the West Midlanders (W6 D3 L1), and we’ve gone sixteen unbeaten against them at Stamford Bridge (W13 D3 L0). Their trip south on Monday could not be better timed from our perspective.

Our last meeting in November ended in a 4-0 victory at the Hawthorns, with goals coming from Eden Hazard (x2), Marcos Alonso and Alvaro Morata.

West Brom’s bold new era under Alan Pardew isn’t quite going as planned. The Baggies are playing better now than they were under Tony Pulis, and their brand of football is certainly more eye-catching, just one win in twelve in the league (W1 D5 L6) under the silver fox’s guidance tells its own tale.

The Baggies have a few injury problems at the moment and none more important than that of Jonny Evans, who has apparently trapped a nerve in his back. The centre half is key to West Brom’s rigid shape, and his absence is a huge blow.

Pardew signalled his intent to play a more attacking game than Pulis did by signing Daniel Sturridge on loan during the transfer window, and not just that he paired him with Salomon Rondon in a two-man attack against Southampton – almost unheard of these days. The Baggies, however, were still undone in a 2-3 defeat.

If they play the same flat 4-4-2 formation against us at Stamford Bridge we will make them pay; especially with Hazard and Willian dropping into those pockets between midfield and defence. They will, presumably, switch to something more reminiscent of a 4-5-1 and look to stifle us.

The good thing is that, these days, we have a Plan B. We all want to see the Blues playing attractive, stylish football, and certainly with the likes of Hazard and Cesc Fabregas that is what we are expected to do. But, if necessary, we can go direct to Olivier Giroud, and that may be a winning formula against a West Brom side who are likely to defend deep and in numbers.
Email ThisBlogThis!Share to TwitterShare to FacebookShare to Pinterest