How do you analyse a 1-1 draw with Barcelona? It’s a result which probably makes the Spaniards favourites to progress to the quarter finals of the Champions League at our expense, but we can take so many positives from the game that the players will head to Catalonia for the second leg in high spirits.

On a night when a galaxy of stars were on display, who shone the most? You would have to say Willian, with the Brazilian delivering a real coming-of-age style performance. He was twice denied by the woodwork, before finally breaking his and the game’s deadlock on the hour mark.

We were cruising, coasting, comfortable….any such adjective you want to use, as time and time again the Barca attacking players ran down cul-de-sacs and dead ends created by our excellent discipline and organisation.

But as is often the case against teams of this calibre, one mistake can be all it takes to get punished. And so it proved: Andreas Christensen’s wayward pass was intercepted by Andres Iniesta, who fed Lionel Messi. The rest, as they say, is history.

It was a tactical masterclass from Antonio Conte, who decided to field Eden Hazard as a ‘false nine’ type striker with Willian and Pedro offering support from midfield. It was a system tat frustrated Barcelona, and ensures we head to the Nou Camp with plenty to be positive about.

“I think we were close to playing the perfect performance. We did one mistake, but we know very well against these opponents and players like Messi, Iniesta and Suarez, if you make a mistake you pay,” Conte said afterwards.

“It is a pity and we are disappointed with the final result. I think we played a really good game, and I must be pleased because my players gave a great effort and they followed the plan we prepared.”

There is no rest for the wicked however, and on Sunday we must put the Barcelona tie behind us and focus on a different type of challenge.

Jose Mourinho’s Manchester United won’t play on the front foot like Messi and co, and as we know first hand they will instead look to grind out a result in the ‘Special One’s’ inimitable style. It won’t be pretty, put it that way.

There are three confirmed absentees from our squad for the time being – Tiemoue Bakayoko (probably), David Luiz and Ross Barkley, and from here Conte must work out the best way to break down this United rearguard.

We would expect a slightly more expansive Chelsea system, and the boss will surely be tempted to recall Alvaro Morata, whose superb header won the reverse fixture back in November.

The Spaniard, along with Hazard and the dazzling Willian, offers plenty of attacking threat, and Conte may choose to balance that by picking the more metronomic Danny Drinkwater over the mercurial Cesc Fabregas in midfield.

The first choice back three of Rudiger, Christensen and Azpilicueta will be restored you would think, with the former’s physical battle with Romelu Lukaku set to be a bruising affair. Conte will surely stick with Christensen, who has barely put a foot wrong all season until that error on Tuesday. 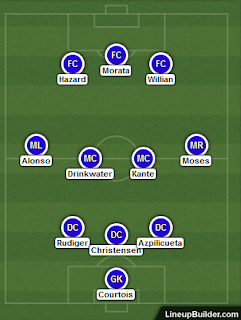 Clashes between these two sides are notoriously tepid, with ten of the last twelve encounters between the pair yielding two goals or fewer.

Neutral spectators can thank Jose Mourinho’s influence for that. The Portuguese manager’s ego is so large that he would rather grind the life out of a game and take a dull draw to save himself the personal anguish of losing to a former employer.

The good news is that the Blues have profited from United’s lack of adventure under Mourinho and his predecessors Louis van Gaal and David Moyes. We have lost just one of our last 12 clashes against the Red Devils, with a run of W1 D3 L1 indicating our ability to pick up points at Old Trafford.

The good news is that Mourinho is nothing if predictable. He will play four at the back, two defence-minded midfielders, one slightly more advanced central midfielder and two attacking options starting from wide areas to support Lukaku.

So how do we stop Manchester United? Maybe we don’t have to. They have scored just eight goals in their last seven league games; the enterprising play of the Mancunians now a distant memory under Sir Alex Ferguson.

If we can limit the supply to Lukaku by marking Alexis Sanchez effectively – he will start left and drift inside (perhaps even Azpilicueta will do a man-marking job on the Chilean) – we should be fine.

As has been the case before, Ander Herrera will be tasked with his own man-marking mission, presumably on Eden Hazard. That’s fine: the Belgian has a habit of shaking off tight markers, and besides which that will deflect attention away from Willian, assuming he starts.

This will be tight, testing and tough, but you have to fancy that Chelsea are one-goal better than United right now.
Email ThisBlogThis!Share to TwitterShare to FacebookShare to Pinterest