Embed from Getty Images
The finer details – Alvaro Morata hitting the woodwork with a fine effort and having a goal wrongly ruled out for offside – and the performance levels confirm that Chelsea were rather unfortunate to leave Old Trafford empty handed on Sunday.

Was the defeat disappointing? Yes. Was it deserved? No. Can we take any positives from it? Absolutely, and that is the mindset that Antonio Conte must carry into Sunday’s trip to take on United’s Mancunian rivals.

We’ve now outplayed Barcelona and gone toe-to-toe with Manchester United in the space of a week or so, and so there is absolutely no need for us to head north with any negativity in mind.

We all know about Manchester City’s brilliance on home soil, and their ability to tear apart any opposition almost at will. But we have shown against Barcelona and Tottenham, admittedly a while ago now, that we can mix it with the best attacking sides.

That is partly down to Antonio Conte’s powers of organisation and discipline, and those will be needed in all their glory here. And it is also partly down to the concept that perhaps we are just better at playing the underdog role rather than leading from the front; certainly now that the finale embers of our title-winning season have burned out.

Each time we have been asked serious questions this term, with Conte’s job on the line a few times according to the press, the players have come up with a defiant answer. They will need to do so again on Sunday.

There are two strategic options that Conte can take here. The first would revolve around the same system deployed against Barcelona, where we looked comfortable in defence and dangerous in attack. The ‘false nine’ system, with Eden Hazard playing through the middle flanked by Willian and Pedro in ‘defensive forward’ type roles, would certainly help to close down this outstanding Manchester City side.

Another option would be to start Olivier Giroud up front as some kind of human battering ram. If Pep decides to play any two from Stones, Otamendi and Laporte in defence, we’re not exactly convinced that they enjoy the kind of rough stuff typically deployed by the Frenchman.

The back five will remain as normal, you would think, with Azpilicueta, Rudiger and Christensen forming the central trio and Victor Moses and Marcos Alonso at wing backs.

Either of the systems touted above would need a dual defensive pivot, and photos this week of Tiemoue Bakayoko back in full training may just give this Frenchman a chance to secure redemption after a tough start to life in London.

As for the attacking array, that really is in Conte’s hands. You suspect that he might start with the false nine set-up and play it by ear, but undoubtedly Giroud’s physicality won’t be far from his thoughts f the need arises to rough City up somewhat. 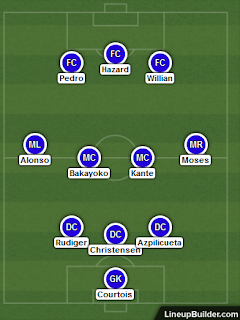 We enjoyed a fine double over the Citizens last season – you may just recall the fractious 3-1 win at the City of Manchester Stadium where tempers flared and Sergio Aguero and Fernandinho were sent off, and we followed up with a 2-1 win at the Bridge in April.

Our paths crossed again in September when City gained revenge with a 1-0 win courtesy of Kevin de Bruyne.

The past ten meetings between these two sides have yielded four wins, two draws and four defeats for the Blues, and we have triumphed twice in four trips to City’s home stadium.

As mentioned, we really do have to go to the City of Manchester Stadium with a positive mindset; if we are too defensive, then City will pick us off as they have done to pretty much everyone else this season.

So we can be responsible but still look to attack; and that has to be our game plan on Sunday.
The Citizens could be without Fernandinho and Raheem Sterling, with Fabian Delph suspended, and that affords us opportunities.

Fernandinho is a brilliantly underrated player who does all of the dirty work, which naturally lets Silva, De Bruyne, Sterling, Sane, Aguero and co to go about their business.

Delph, meanwhile, has asserted himself as a key figure at left back in Guardiola’s system; to the extent that he may even be a shock call-up to the England World Cup squad in support of Danny Rose. His absence means that Danilo will probably start at left back, and with Willian posted on the right hand side against him we can lick our lips in anticipation of that contest.

How do you stop City scoring? It’s very difficult, but then Wigan Athletic achieved it! We need to use a high line – Aguero doesn’t have the pace to run in behind any more – and press Silva and De Bruyne quickly and effectively, forcing them sideways or backwards if possible.

Danger will come down the flanks with the full backs supporting Sane and Sterling (if he starts) or Bernardo (if Sterling doesn’t), and so Willian and Pedro will have key defensive roles to fulfil.

But there are options and opportunities for us to enjoy, and anyone thinking a Manchester City win here is a formality are sorely mistaken. We’ve upset the odds in the past, and can do so again.