Embed from Getty Images
It’s a bright new dawn for Chelsea, with a new manager, a new shape and a couple of new players to admire.

Saturday’s trip to Huddersfield provides the Blues with their first opportunity to make a statement ahead of the new campaign; we are gunning for a top four finish this term.

Maurizio Sarri will bring a fresh, attack-minded impetus to proceedings, with his Napoli side averaging two goals per game last season.

Our pre-season results don’t hint at a goal glut to come – 1-1 draws with Inter Milan, Arsenal, 0-0 with Lyon and 0-2 to Manchester City in the Community Shield – but once our key men have recovered from their World Cup efforts, and are used to the new system, we can expect some free-flowing football from the boys in blue.

For now, getting a result in Yorkshire by any means would be the perfect start.

As you are probably already aware, changes are afoot.

Thibaut Courtois has decided to move loser to his family in Madrid, with the shot stopper signing terms at Real. He will be replaced by Kepa, the 23-year-old from Athletic Bilbao who becomes the most expensive goalkeeper in history. No pressure, then!

As part of the Courtois deal, Mateo Kovacic joins us on loan. He is a classy operator in midfield, and he will become a key figure in Sarri’s enterprising style of football. But after helping Croatia to the World Cup final, he may be given some extra time off to reach peal fitness.

The same is true for N’Golo Kante, who returned to training late alongside Olivier Giroud, and so Jorginho, Sarri’s first big money signing, is expected to start in midfield. His dynamism and range of passing will give us an extra edge in the middle this term.

The new manager has fielded his favoured 4-3-3 system during pre-season, and we expect him to do likewise here.

So Kepa comes straight in for his debut, with Cesar Azpilicueta and Marcos Alonso playing as traditional full backs outside of, possibly, Antonio Rudiger and David Luiz.

Jorginho could be joined in midfield by Cesc Fabregas and Ross Barkley, who has featured prominently in the friendlies.

Up front, Alvaro Morata will presumably lead the line with, maybe, Pedro right and Eden Hazard left. But watch out for a cameo from Callum Hudson-Odoi, who has really caught the eye in pre-season. 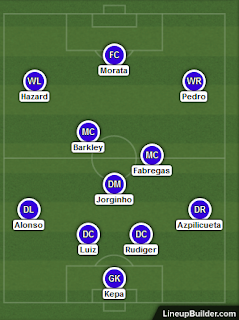 Last season’s pair of meetings between these sides was the first time they had met in the league since the 1980s!

It was a decent enough return for Chelsea, with a 3-1 win at the John Smith’s Stadium followed by a 1-1 stalemate at the Stamford Bridge.

All in all, Huddersfield haven’t beaten Chelsea in the league since 1963!

What’s new about Huddersfield Town? Very little, in truth, with the on-loan trio of Terence Kongolo, Florent Hadergjonaj and Jonas Lossl all signing permanent terms and Ramadan Sobhi and Adama Diakhaby joining from the rather contrasting Stoke and Monaco.

So its evolution for the Terriers, rather than revolution, but is that enough? They finished just four points clear of the dropzone last season, and won just three games in the period from Christmas until the end of the season.

Opportunity knocks for Chelsea then, although they will be tested in different ways here than they have been in pre-season.

Huddersfield will be aggressive, intense and in-your-face, and so Chelsea’s new boys will need to be up for the fight. It will be a culture shock for those from La Liga and the Serie A, that’s for sure!

But class generally shows through in the end, and in this new free-spirited Blues side will enjoy plenty of possession against the Terriers.

Freed of Antonio Conte’s shackles, back the boys in blue to get 2018/19 off to the perfect start.
Email ThisBlogThis!Share to TwitterShare to FacebookShare to Pinterest