The changes that Maurizio Sarri has made to Chelsea were clear for all to see in the 2-1 against Newcastle on Sunday.

We enjoyed 81% possession of the ball against the Magpies – staggering when we think back to the second season of Antonio Conte’s reign, and while we didn’t exactly carve out countless chances we did more than enough to win the game.

It did need an own goal from DeAndre Yedlin, who turned a shot from Marcos Alonso, to seal the deal, after Eden Hazard’s penalty was cancelled out by Joselu.

Otherwise, Antonio Rudiger hit the crossbar and that was the sum of our efforts in front of goal.

It was a game packed with positives, however, not least because it maintained our 100% record in the 2018/19 campaign thus far.

Eden Hazard also made his first starting appearance of the season after being given extended leave following the World Cup, and the Belgian hit the ground running alright. His link-up play with Mateo Kovacic and N’Golo Kante was a joy to behold at times.

That duo, alongside Jorginho, have revolutionised the Chelsea midfield. They play fantastic little triangle passes, and Kante appears to be a man reborn after being given freedom to roam.

This week we tackle Bournemouth, a side who have impressed so far. They have scored two goals in each of their trio of matches so far, and so they must not be underestimated. Eddie Howe has them playing some adventurous football this term, and in Callum Wilson they possess one of the most natural finishers in the division.

But this is another chance to see how the revolution of Chelsea under Sarri is developing, and we cannot wait!

There are no new injury concerns for the Blues, with Cesc Fabregas the only absentee with an undisclosed leg injury.

And so Sarri has a full deck to work with, and you suspect the eleven that started against the Magpies is his preferred selection.

Cesar Azpilicueta and Marcos Alonso are perfect full backs in the Italian’s expansive system, while Antonio Rudiger and David Luiz offer physicality but smarts with the ball at their feet too.

Kovacic, Jorginho and Kante will continue their partnership in midfield, while Hazard and the rejuvenated Pedro provide the guile on the flanks. Up front, Alvaro Morata looks sharp and hungry after falling out of favour under Conte last season.

Oh, and we’ve not even mentioned Kepa yet! The new keeper has looked an assured presence so far, but even so let’s hope he won’t be too busy on Saturday. 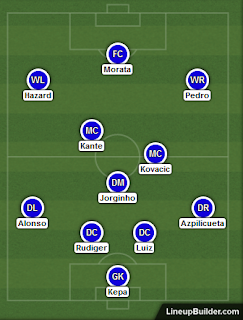 Incredibly, these two teams have only met 12 times in history, with the first coming as recently as 1988.

That’s to do with Bournemouth’s late to the party stance as a top flight outfit, and so far the Cherries have not enjoyed the best of their head-to-head matches with Chelsea.

We have been on the winning side nine times, including twice last season in the Premier League and in the EFL Cup. However, it’s not all been one way traffic, and on January 31 they demolished us 0-3 at the Bridge.

But this is a new dawn under Sarri, and with confidence flowing we can expect a continuation of our fine record against the South Coast outfit.

Bournemouth tend to line up in a 4-4-1-1 system, with David Brooks supporting Callum Wilson through the middle and Josh King and Ryan Fraser providing the pace in wide areas.

It’s a side designed to counter attack with gusto, and we must be on our guard with that in mind.
But we know that Sarri won’t compromise for anyone – we saw that in his time at Napoli – and so once again we will be playing on the front foot and attacking in numbers.

The good news is that Adam Smith, Bournemouth’s excellent right back, is suspended, and so Simon Francis is likely to deputise. Hoe doesn’t have the burst of pace that Smith has, and Eden Hazard down our left hand side should have plenty of joy with Alonso overlapping on the touchline.

The Cherries went 0-2 down against Everton despite their opponents being reduced to ten men, and be under no illusions Chelsea will not be as forgiving as the Toffees.

Expect the Blues to take the spoils in a loosely-fought encounter.
Email ThisBlogThis!Share to TwitterShare to FacebookShare to Pinterest