Chelsea vs Manchester United Match Preview (19/05/18): Can Blues Get Their Hands On Some Much Needed Silverware?

Embed from Getty Images
It is fair to say that our Premier League campaign fizzled out in something of a whimper with the 0-3 defeat a Newcastle on Sunday, and now we must recover quickly in order to have a chance of landing some much-needed silverware in the FA Cup final on Saturday.

We say ‘much needed’, but in a season in which we have gone from champions to the fifth best team in the land, a trophy is at least some vindication for the players’ efforts this term.

And it might just be enough to convince Antonio Conte to have another year at the helm….

The Italian was frustrated but calm in the aftermath of the defeat against the Magpies. “We deserved to lose because our start wasn't good and we suffered by losing every ball. Newcastle were more determined than us,” he said.

“We didn't lose our Champions League place today, we had chances in the last two games, but to finish the season this way is not good for anyone connected to the club.

“When you are at the end of the season, this performance can happen, but the first person to answer for this must be the coach. I wasn't able to convey that determination to my players.”

Redemption could be just a matter of hours away. The players stand 90 minutes away from glory; a win helping everyone to get over what has been a disappointing campaign by our high standards.

A chance to get one over on Manchester United and Jose Mourinho? That’s always welcome, too!

Fortunately, the one upside to the Newcastle game is that we have no new injuries to worry about ahead of our Wembley date.

David Luiz and Danny Drinkwater will miss out, but otherwise Conte has a full deck to choose from.

One of his toughest decisions will come in goal: he has used Willy Caballero as the cup keeper throughout the campaign, with the Argentine featuring in each of our six FA Cup dates thus far. Will Conte keep faith, or will he bring in Thibaut Courtois for the final?

The interesting team news coming from Manchester United is that both Romelu Lukaku ad Marouane Fellaini are struggling to be fit in time.

Their physical presence – Lukaku from the start, Fellaini from the bench – would have caused us a few problems, and now instead United will have to use either Alexis Sanchez or Marcus Rashford through the middle. That may change Conte’s team selection too, with the pacier Andreas Christensen arguably a better bet than the physicality of Gary Cahill.

We have gone with a 3-5-1-1 system lately and that presumably won’t change for the final, with Kante, Bakayoko and Fabregas tasked with shutting down the middle of the park against United’s possible trio of Pogba, Matic and Lingard. We deployed the 3-4-3 shape at Old Trafford in February and went down 1-2, so perhaps discretion will be the better part of valour at Wembley. 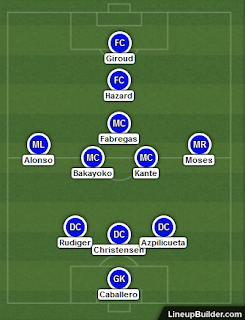 Chelsea and Manchester United have met on an incredible 179 occasions, with the first encounter dating back to 1905! That match ended 0-0, so let’s hope for something rather more exciting 113 years later….

We have, by and large, enjoyed the upper hand of the head-to-heads, with a run of W8 D5 L2 dating back to Halloween 2012. Worryingly, United have won two of their last three against us with Mourinho at the helm, although they both came at Old Trafford.

We have enjoyed recent battles in major cup finals, too. You may recall Didier Drogba notching a winner for us in the FA Cup final of 2007 against United; the first to be played at the new Wembley.

But the Red Devils would have their revenge a year later when they bested us in the Champions League final.

And so all conventional logic goes out of the window on these showpiece occasions….it's simply about who can handle the pressure better.

It is a concern that we lost in last season’s FA Cup final, but at least that gives the players a chance to redeem themselves 12 months later. Coming at the end of a title-winning campaign, the final was perhaps one game too far.

United look set to be without Lukaku, Martial and Fellaini, and that hampers the attacking potential of a side known for conservatism and a defensive outlook already. Knowing Mourinho as we do, he will look to strangle the game and nick a goal on the counter attack or from a set piece.

The one thing we can say about United is that they are hard to beat, but we have players like Hazard, Fabregas and Giroud who can break down the door and create a moment of magic. Marcos Alonso and Victor Moses will look to isolate themselves against the United full backs and sling crosses into the Frenchman.

This particular edition of the FA Cup final, you fancy, will be won in a single moment of brilliance in an otherwise fraught battle of ‘chess with a ball’. Let’s hope that it’s the Blues that come out on top.