Newcastle United vs Chelsea Match Preview (26/08/18): Blues Must Be Willing to Grind in the North East

Embed from Getty Images
The 3-2 win over Arsenal last Saturday was so chaotic it is hard to know where to start in analysing it.

The positive news is that we ripped through the Gunners’ backline at will, making the most of their high line to fly into a 2-0 lead courtesy of the rejuvenated Pedro and Alvaro Morata.

But defensive lapses – a result of the switch to four at the back? Perhaps – allowed Arsenal to draw level through Henrikh Mkhitaryan and Alex Iwobi.

The second half was rather nip and tuck, but one moment of class settled matters and that came from substitute Eden Hazard, whose trickery created a crossing chance from which Marcos Alonso duly obliged.

It would be erroneous to suggest that Chelsea deserved to win the match conclusively, but we had more of the ball and ‘won’ the shots on target count 11-6, so we always looked the more likely.

In summary, Maurizio Sarri said: “We did very well for 75 minutes but, inside that, 15 minutes were horrible.

“It was very, very difficult because we lost the distances between the players and we were unable to cover the lost balls and press like a team, so we were really in trouble. But I think the players were really very good because at 2-2 it was not easy with Arsenal.”

Either way, our 100% record in 2018/19 remains intact, and you could probably argue that there’s a chance we could take a perfect nine points from nine from Sunday’s trip to Newcastle.

The Magpies take no prisoners but do lack somewhat in quality, so maybe the Sarri revolution will continue at pace in the North East.

The manager opted for an unchanged side against the Gunners, and was duly rewarded with the win.

But there were some rather hefty question marks about our efforts defensively, and while it is unfair to make a scapegoat perhaps Andreas Christensen will come in for Antonio Rudiger on Sunday.

The midfield three of Kante, Jorginho and Ross Barkley is gelling nicely, although you wonder how classier we will look once Mateo Kovacic is back to full fitness.

The on-loan midfield metronome was given an extended break following Croatia’s heroics at the World Cup, but once he is back up to speed he will presumably come into the side for Barkley – this may be a week too soon, however.

Sarri continues with William and Pedro either side of Morata, but surely it’s only a matter of time before Hazard returns to the starting eleven….right? 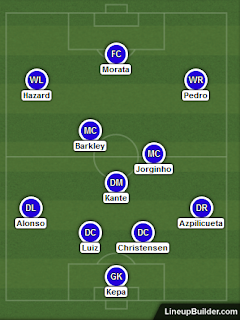 The first recorded fixture between these two teams came more than a century ago in 1907, when Newcastle ran out 1-0 winners.

Since then there have been more than 160 meetings between the Blues and the black-and-white stripes, with Chelsea boasting a 71-53 win/loss record.

We’ve won four of the last six contests, although all of those were played at Stamford Bridge. At St James’ Park, our record is a rather more cumbersome W1 D1 L4 in recent times.

Last season we met on three occasions, with 3-0 and 3-1 wins on home soil in the league and FA Cup, followed by a 0-3 trouncing in the North East in the return league date.

If you were planning on having a bet on Sunday, here’s an interesting titbit: only one of the last 13 meetings between the pair have ended in a draw.

We don’t have a great record at St James’ Park, but this is a bright and exciting version of Chelsea under Sarri, and all that has gone before can be ignored.

The Blues look an attacking force to be reckoned with, with a narrow front three supported from deep and in wide areas by the marauding Alonso and Azpilicueta.

At times we swarmed all over Arsenal, and while Newcastle will have plenty more bodies behind the ball, we can hope for a numerical advantage in advanced parts of the pitch.

The Magpies offer very little going forward, compounded by the loss of the not-prolific but still dangerous Dwight Gayle, and so hopefully we will be on a sounder footing defensively than we were on Saturday.

We expect our attacking prowess to pay dividends, but this will be a scrap and we need to be up for the physical battle that will undoubtedly ensue on Sunday.

If we can match Newcastle in that department, we have all the ammunition required to claim the three points.
Email ThisBlogThis!Share to TwitterShare to FacebookShare to Pinterest