Barcelona vs Chelsea Match Preview (14/03/18): Can the Blues Serve Up Another Miracle in Catalonia?

Embed from Getty Images
We’ve been here before, of course. Twice Chelsea have overcome the odds and got a result at the Nou Camp to knock Barcelona, perennial Champions League favourites, out of the competition.

And so we head to Catalonia on Wednesday with visions of the ghost of football past, and all we can hope now is that Antonio Conte is at his Scrooge-like best to minimise the damage caused by Barca’s galaxy of stars, which includes Lionel Messi and Luis Suarez.

We do at least have positivity to take into the encounter following Saturday’s 2-1 win over Crystal Palace. That bore all the hallmarks of your classic banana-skin fixture – particularly as Palace have a decent record against us at the Bridge in recent years – but a strike from Willian and an own goal from Martin Kelly secured all three points for the Blues despite old boy Patrick van Aanholt’s last minute consolation.

And so onwards to Barcelona we go, looking to manage a 1-1 draw from the first leg. That hands the advantage to our hosts, of course, who have an away goal at their disposal. But lest we forget how the Blues dominated the first encounter, and as such have nothing to fear against a side we have gotten the better of a couple of times in recent memory.

There was a rather alarming news article in The Guardian this week, which stated that Antonio Conte will consult with his players as to the tactics and formation he will deploy in Spain.

That comes after the criticism of the gaffer that followed the defeat at Manchester City, with the players looking less than thrilled with the parked bus they were asked to erect at the City of Manchester Stadium.

The likely resolution of that consultation will be that the Eden Hazard ‘false nine’ set-up, which has worked well at times this term, will be kicked to the kerb in order to pacify the stroppy Belgian.

The upshot is that the players’ wish to try and play on the front foot against elite-level opposition will be sworn in against Conte’s better judgement, and as we know teams who go to the Nou Camp and try to attack are typically torn to shreds.

That said, we have to score at least once at the Nou Camp, and so a small argument can be made that at least travelling with the intention of meeting fire with fire against Messi and co is the best way to conduct business.

And so we can expect the traditional 3-4-3 shape to be retained in Spain, with Antonio Rudiger coming into the side that took to the field against Palace in place of Gary Cahill.

It could be a huge night for Danny Drinkwater, who was left out of the squad against the Eagles but who will surely partner N’Golo Kante in midfield here. Tiemoue Bakayoko is still some way short of full fitness, and Cesc Fabregas’ lack of defensive discipline would surely see us come unstuck in the middle of the park.

Hazard and Willian will be restored to their customary positions but tasked defensively to drop deeper and help nullify Barca’s midfield diamond, while a possible out-ball when we are under pressure – and we will be – is Olivier Giroud, whose extra physicality could hand the Barcelona defenders a problem they are unused to facing in La Liga. 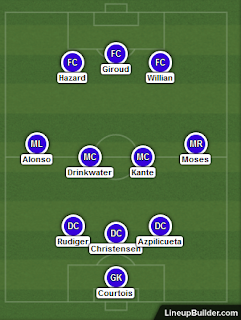 Barcelona vs Chelsea Head to Head

Chelsea have previous for doing the business at the Nou Camp.

You might recall the 2-2 draw there during the 2006/07 Champions League campaign. Goals from Frank Lampard and Didier Drogba secured a crucial point in the group phase that year.

And then there was the trip to Catalonia in April 2009, where we kept a clean sheet in a goalless draw of the semi-final, first leg. Ultimately it would not be enough as Barca would win the tie on away goals, but we showed once again they can be stopped in front of their own supporters.

And finally there was the 2-2 draw in the battle of 2011/12; the night Fernando Torres made Lionel Messi cry by scoring a late winner for the Blues and knocking Barca out of the competition at the semi-final stage.

So how do you stop Lionel Messi? It’s a question managers around the globe have been asking for more than a decade, and the simple answer is who knows?

You know what he’s going to do: drift inside from the right wing onto his favoured left foot and cause havoc, and while there is a simplicity in his positioning actually stopping him is another matter altogether.

At least we will have bodies in his way, and indeed it is possible that Cesar Azpilicueta and Antonio Rudiger will swap sides so that the Spaniard tracks Messi as he slips inside. Drinkwater too will be tasked with blocking the Argentine’s progress.

There are others to watch out for too, including Phillipe Coutinho, Andres Iniesta and the rejuvenated Paulinho – as well as Suarez of course, but if we can pin down Messi then there is every chance we can limit the supply line to the Uruguayan.

At the other end, Giroud will need to impose himself on Gerard Pique and Samuel Umtiti, while Hazard can be Chelsea’s match winner: Barcelona have never really replaced Dani Alves at right back properly, and our Belgian can get the better of either Sergi Roberto or Aleix Vidal. It could make all the difference.
Email ThisBlogThis!Share to TwitterShare to FacebookShare to Pinterest