It seems like an eternity ago now due to the international break, but Chelsea’s 3-0 romp over Burnley last time out was their most complete performance this season.

Goals from Eden Hazard, Willian and Victor Moses got the job done, and remember this was the Blues’ first clean sheet at Stamford Bridge in 13 games. With 60% possession, ten shots on target and nine corners, the margin of victory could have been even greater.

Onto this week then and Super Sunday, where we travel west to take on Swansea in a 4pm kick off. The Swans have tapered off since their opening day win over Burnley, as defeats to Hull and Leicester suggest. They offered little in attack, and had Lukas Fabiański to thank for saving the penalty that kept the scoreline down to just 1-2.

Historically Chelsea have enjoyed themselves in this part of Wales, so can they continue their 100% start to the campaign on Sunday?

Antonio Conte will be delighted that his squad reported back fit and healthy from the international break, and that gives him a full complement to choose from with the additions of David Luiz and Marcos Alonso, of course.

Conte confirmed this week that he sees Luiz as a centre back, rather than midfielder, so whether his introduction will facilitate a change of shape remains to be seen. But what is great for the Italian is that he now has two options: 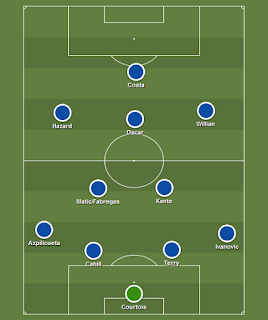 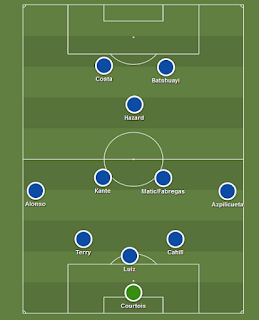 In the first instance Conte will probably persevere with Plan A, the 4-2-3-1 system on the left above, but don’t be surprised if a variation of the 3-5-2 on the right become a factor later in the season.

Swansea and Chelsea have only met twelve times in their respective histories, and it is the Blues that have prospered most with six wins to two (four draws).

Our best spell came from April 2013 to January 2015 when we recorded five straight wins, although last season was something of a nadir as a 2-2 draw at the Bridge was backed by a 0-1 defeat in Wales back in April.

Ironically that was the first time that Swansea had beaten the Blues in six attempts on Welsh soil, with two wins in our favour and three draws previously.

The beauty of this match for Chelsea is that Swansea’s style of play suits us rather nicely. From an attacking perspective, Fernando Llorente will plough a lonely furrow through the middle, with wingers Wayne Routledge and Madou Barrow looking to deliver the crosses he needs to thrive. If they are successful, then we have John Terry and Gary Cahill, both colossal in the air, to mop up any damage.

In midfield it is likely that Nemanja Matic will be selected alongside N’Golo Kante to help with the physical battle against Leroy Fer and Jack Cork, while an eye will need to be kept on Gylfi Sigurdsson too.

Willian will stay high and wide on the right flank to help stretch the play, and his one-on-one battle with Swansea left back Stephen Kingsley is likely to yield plenty of rewards.

Oscar and Eden Hazard will reprise their double pivot in behind Diego Costa. The latter has been in sensational form this term, and that’s thanks in part to the freedom he has been given by Conte to roam inside from the left flank. Here’s his touch map from the Burnley match as published by the BBC: 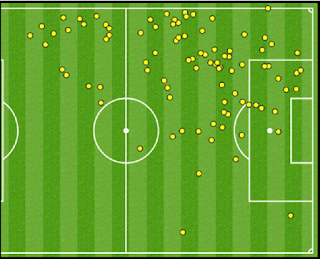 See how Hazard is tracking deeper to receive possession, and yet popping up in central areas in the final third? That makes him a nightmare to plan for defensively, and partly explains why he is running the show at the moment.

Swansea have conceded four goals in their last two starts, and with Costa bagging a brace for Spain in midweek to continue his fine start to the campaign, there is no reason why he and his colleagues can’t take advantage.

The Swans have only scored two goals this season and both of them came via midfielder Fer, so as long as we can avoid giving away free kicks in dangerous areas (Sigurdsson is deadly from inside 30 yards) then there should be no alarms at the back.

All of which suggests that Chelsea have another three points there for the taking.