It’s always easy to point figures in these situations of course, although sometimes a collective acknowledgement of underperformance is required. Yes, defensively we have been shambolic at best in recent weeks, but that mindset begins from the front to the back. Two of Arsenal’s goals last week were partly caused by a lack of application in midfield in breaking attacks down, and so numbers 1-11 should be looking at themselves in the mirror and asking how they can do better.

It’s early days of course and dropped points aren’t the end of the world right now, but ironing out some fairly schoolboy mistakes has to be a priority for Antonio Conte and his team.

There is some good news however: Hull City should provide some respite this week. After back-to-back matches with Arsenal and Liverpool – two teams we should be matching, in truth – at least we can rely on a Hull side in steady decline at the moment to ease the pressure on our stricken backline. Surely three points await for the lads?

Clearly we have defensive issues at the moment, and the return of John Terry should help to solve those. He may slot in at centre half as a straight swap for Gary Cahill, who has been at fault for a couple of goals recently, or Conte may instead opt to play his preferred 3-5-2 formation with Terry and either Cahill or Branislav Ivanovic alongside David Luiz in the three.

This is how we could line up against Hull City: 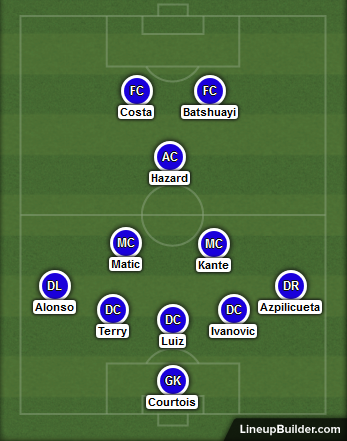 It’s just an idea of course, but no doubt plenty of Blues fans are crying out for Conte to shake up what has become a rather stale-looking side in the past few weeks. This system would add defensive solidity without blunting the attack, with Michy Batshuayi let off the leash from the start (taking some of the pressure off Diego Costa) and allowing Eden Hazard to roam in a free role. It would be harsh on Willian, the main casualty of a change in shape, but something must be done to get the campaign back on track.

Hull will be without the suspended Ahmed Elmohamady, and with Michael Dawson and Alex Bruce both still inured it means that Jake Livermore will continue at centre half. He is not a natural defender by any means, so pairing Costa and Batshuayi up top will put extra pressure on his defensive capabilities.

Hull City have bobbed in and out of the English top flight over the past few decades, so their head-to-head record with the Blues is rather patchy.

The good news is that in the 44 matches they have played, Chelsea have had the upper hand with 30 wins (ten draws and four defeats). Hull last defeated us way back in 1988, and in the 12 matches played since then our record reads W10 D2 L0. That bodes very nicely indeed.

First things first….let’s defend better, for starters! Conceding seven in three is wholly unacceptable, and while pinning the blame on individuals isn’t helpful let’s hope that Conte has been working on a winning formula to resolve that. Whether Terry comes in as a straight replacement for Cahill, or the formation is re-jigged entirely, let’s just get the basics right.

If we can keep a clean sheet here we should be laughing. Hull have conceded nine in their last two starts, are without a recognised right back due to Elmohamady’s red card last week and in Jake Livermore are lacking a defensive general in the form of a Michael Dawson, who is still not 100% fit.

So we should have plenty of chances….but how do you break this Hull side down? Here is how they typically line up:

It is a necessarily defensive line up, and as you can see from the central midfield three there is no real onus on getting forward. The task of supporting Abel Hernandez will fall to the in-form Robert Snodgrass and Diomande, which actually lends itself to playing the 3-5-2 system: our wing backs can track them inside, or let them run into the half back spaces monitored by N’Golo Kante and Nemanja Matic. Either way, there will be plenty of bodies in place to repel the Tigers.

In an attacking sense, Hazard is likely to be well patrolled by any number of Hull players, and so there will be a need to play wider and stretch the game. Both Azpilicueta and Alonso are handy going forward, and they could theoretically e swinging balls into the box for Costa and Batshuayi to attack against Livermore and Davies. Our money is on the Blue boys to win that particular duel, and to bring the three points back to London.