Chelsea v Burnley Match Preview (20/8/16): Expect Blues to Triumph… But it Might Not Be Pretty

Three games, three wins. Forget the minutiae and the details, just drink that in. The Chelsea revolution is well underway with Antonio Conte on board; and he’ll be hoping his side can make it four on the bounce against Burnley on Saturday.

Things didn’t look particularly rosy after a flaccid hour or so at Vicarage Road last week, and Watford probably deserved the lead they took when Etienne Capoue fired home.

But an inspired triple substitution from Conte – introducing Michy Batshuayi, Cesc Fabregas and Victor Moses after 70 minutes – changed the nature of the game completely. Batshuayi notched the equaliser with a predatory finish, before Fabregas set Diego Costa free with a sublime through ball and the Spaniard duly obliged.

Up until the introduction of this trio, the Blues had managed just one shot on target. In the last 20 minutes alone they managed another three and spent 20% more time in Watford’s penalty area. So we can call this a masterstroke from Conte if we wish, or we can praise the influence of the three men that came on. A bit of both, perhaps.

That theme continued on Tuesday night with a 3-2 win over Bristol Rovers in the EFL Cup, where Batshuayi once again impressed with a brace (it could have been a hat-trick but for an offside flag). Fabregas was outstanding again, and so Conte has plenty of food for thought ahead of the Burnley clash.

With Willian the only injury concern – the winger is still recovering from a calf injury, and is rated as 50/50 at best – Conte has a full compliment to choose from. The hard part will be coming up with the personnel that can break down stubborn Burnley resistance. The Clarets will play a 4-4-2 system, but their wide players will operate in a defensive manner, with Andre Gray dropping deep to support his two central midfielders.

So with the onus on Chelsea to break down their opponents – Liverpool had 80% possession against Burnley last week remember – the temptation to pair Batshuayi and Costa from the off will be very much on the Italian’s mind.

With less demand upon a midfield shield, Fabregas could well keep his place ahead of Nemanja Matic, with Eden Hazard again drifting in from the left flank and causing havoc between the lines.

This is how the Blues could line up: 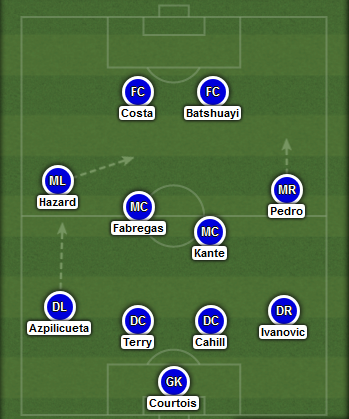 Chelsea and Burnley have locked horns on 92 occasions, with the very fixture dating back to the year 1905 when the Blues triumphed 1-0. The overall head-to-head sits at, surprisingly, 33 wins to Chelsea, 37 to Burnley and 22 draws.

Much of the Clarets success came during their halcyon days in the 1910s and 1920s, and other than a bizarre spell between 1954 and 1956 when they played out six consecutive draws Chelsea have had the upper hand ever since. Post 1973, the Blues have won ten of the fifteen meetings.

The last time the two sides met at Stamford Bridge was in a 1-1 draw back in February 2015.

Make no mistake: this won’t be the walkover that many are predicting. Burnley have only conceded one goal so far, and while they are happy to allow their opponents to have the ball they are so well organised defensively that they don’t mind that too much.

This Burnley outfit has echoes of Leicester City in 2015/16: men behind the ball, and then counter attack at pace with Sam Vokes a physical ‘out ball’ and Andre Gray’s extreme pace feeding off any knockdowns. The Blues will have to be wary of this, but with N’Golo Kante in his usual midfield destroyer role we should have plenty of strength in our final third of the pitch.

The mistake Liverpool made against the Clarets is that they shot almost exclusively from outside the box; a symptom of being unable to break down the two banks of four in front of them. Instead, they would have been better served doing what Swansea did in their 1-0 win over Burnley: loading early crosses into the box. Leroy Fer’s goal came from a rebound which was a header saved from Fernando Llorente, and the Swans’ best work came from quick play out wide and whipped crosses for their lanky frontman to attack.

Let’s hope that Antonio Conte reads this and starts with Batshuayi up front alongside Costa to give the Blues a greater physical presence in attack! The good news is that if Hazard and Pedro can isolate themselves against Matthew Lowton and Stephen Ward respectively then plenty of crossing opportunities should be available; watch out for the introduction of Victor Moses too, an old-fashioned winger who has started the season brightly.

At the other end of the pitch Burnley shouldn’t pose too many problems; they’ve recorded just five shots on target so far in two games. Consequently, a 1-0 or 2-0 Chelsea victory should hopefully be in the offing.