Now that’s more like it. It might seem like an eternity ago, but cast your mind back to Chelsea’s last outing in the Premier League and you may recall a comprehensive 2-0 victory over Hull City.

The match was pertinent for many reasons, perhaps even the manner of the performance more enjoyable than the result itself. As predicted by this very column, Antonio Conte had had enough of the defensive woes that had beset his side in the preceding weeks and decided to switch to his favoured 3-4-3 formation that had worked so well for him while in charge of Juventus and the Italian national team.

The outcome? Well, it worked clearly, as a clean sheet and a greater solidity to the spine of the team complimented the attacking trio of Hazard-Costa-Willian very nicely. There was the odd stumble, but every journey starts with a first step and now the Blues can head into Saturday’s lunchtime kick-off against Leicester with renewed confidence.

The international break is an absolute nightmare for club managers; they’d prefer it if their players didn’t travel at all, or if they do at least wrap them up in bubble wrap and pray that they are an unused substitute.

Happily, it wasn’t all bad news for Conte. Thibaut Courtois and Eden Hazard enjoyed a fright-free time in Belgium’s 6-0 win over Gibraltar, while defenders Cesar Azpilicueta and David Luiz and midfielders Nemanja Matic and N’Golo Kante weren’t selected for Spain, Brazil, Serbia and France respectively. Diego Costa netted against Albania and subbed off after an hour against Italy, so his workload hasn’t been too demanding either.

Away from international duty, John Terry looks set to be fit after a lengthy battle with injury, and he may come into the side in place of Gary Cahill, who endured a tumultuous evening for England against Slovenia on Tuesday. It is unlikely that Cahill and Terry will play in the same back three together as they lack the pace to deal with Jamie Vardy’s probing runs into the channels.

Victor Moses appears to have shrugged off a hamstring injury which has dogged him all week – good news, given his man-of-the-match performance as a wing-back against Hull, but one player definitely missing is Willian, who has flown home to be with his family following the death of his mother.

Willian’s loss leaves a bit of a gap – he looked every good last time out playing just behind and to the right of Costa. It may be the case that Oscar gets the nod to replace him, although the Brazilian appears to have been frozen out a little bit by Conte. Other options include bringing in Pedro or Ruben Loftus-Cheek, or switching to a 3-5-2 and pairing Costa with Michy Batshuayi.

How the Italian plays it is anybody’s guess, but bringing in Oscar is perhaps the move that makes the most sense. Here’s how we would expect the Blues to line-up accordingly: 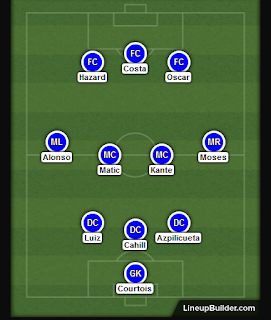 Given that Leicester were in the doldrums for so long, it is perhaps unsurprising that Chelsea hold such a dominant head-to-head lead over the Foxes: 38 wins to 18 to be precise, with 23 draws.

That is exacerbated further in matches played at the Bridge: Chelsea with a huge 27-4 lead on home soil. Indeed, Leicester have only won one of their last 23 visits to the home of football!

There has been plenty of talk this week of Claudio Ranieri following his compatriot and changing his side’s shape to deal with some rather inconsistent form (particularly away from home). He may opt to bring an extra man into midfield to help deal with the threat of Eden Hazard, and leave Jamie Vardy up front on his own as a focal point. After failing to get onto the pitch in England’s two games last week, he will be chomping at the bit. 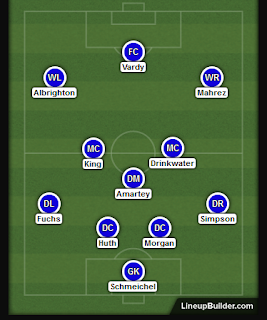 So what does this mean for Chelsea? Well the good news is that we will have an overload at the back: Cahill and Luiz can manage Vardy’s runs between them and a combination of Alonso and Azpilicueta can deal with Mahrez, with Kante picking up the loose balls in front of the back four. That is Leicester’s main attacking outlet diminished.

Out wide you would expect that Mahrez and Albrighton will be tasked with tracking back with Alonso and Moses – that is a definite area of strength for the Blues, and if Hazard can pick up little pockets of space over Drinkwater’s right shoulder, with Matic pushing forward as a ‘left half’ too, then he could cause carnage.

Leicester have conceded eight goals in their last two away trips to Liverpool and Manchester United, and while the United game was marred by some schoolboy defending from Ranieri’s men, it was obvious how easy it is to tear them apart post-title win just with some direct attacking play and high pressing.

It could be a tight game, won by a single goal margin, but Chelsea deserve to be bookmakers’ favourite for it.