What a week that was. Tottenham’s defeat at West Ham on Friday night meant that Chelsea could extend their lead at the summit of the Premier League table to seven points with victory against Middlesbrough….and Antonio Conte’s boys showed no mercy or finish line nerves.

If there were any nerves around Stamford Bridge given the enhanced importance of the game then those were quickly extinguished as early as the 23rd minute when Diego Costa slotted home from Cesc Fabregas’ pass, and when Marcos Alonso slid home on the half hour mark the champagne was already on ice.

Fabregas created another in the second half for Nemanja Matic, and that was that: the Blues are one win way away from recapturing the Premier League title at the first time of asking under Conte’s leadership.

The only downside to the waltz against Boro was Costa appearing to wave goodbye to the home fans when he netted his goal; it was a bizarre, demonstrative celebration from a player who very rarely shows his emotions in any way other than anger and frustration. Will we be seeing the Spaniard in a blue shirt next season? It’s too early to say.

So the scene is set for Friday night, when Chelsea can mathematically be crowned champions with victory against West Brom at the Hawthorns. Tony Pulis’ side have won one of their last nine and failed to score in seven of those; cancel any plans you may have had on Saturday lads, you might be waking up with the mother of all hangovers.

It’s testament to the resilience and strength of N’Golo Kante that he missed just his second game of the season against Boro on Monday. The French maestro was battling a thigh injury, and Conte decided not to risk him with potentially more important fixtures to come.

The difficulty for the manager now is that Cesc Fabregas was absolutely outstanding once again on Monday night, creating two goals and countless other attacking opportunities for the Blues; indeed, his performance was so good that it is almost impossible for Conte to leave him out of the starting eleven.

But Nemanja Matic has matured into such a calming presence in midfield, and with goals against Spurs in the FA Cup semi-final and another against the Boro, and as such he doesn’t deserve to be dropped. It’s a conundrum for Conte….admittedly a nice one to have!

It may well be that the fall guy is Pedro, a brilliant player but one whose great work generally goes under the radar. The Spaniard may be ‘rested’ to allow Fabregas to play in the inside right role, which he enjoys as it enables him to orchestrate matters higher up the pitch.

Conte is a good man and we suspect he will give John Terry a swansong in defence – although that is likely to come next time out against Watford if the title has been won. 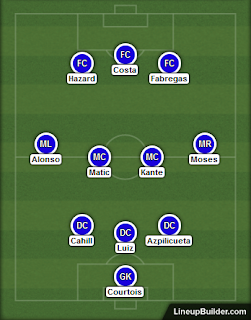 West Brom are the kind of side that you would assume Chelsea would enjoy a positive head-to-head record against, and in the more modern era that is certainly the case.

The Blues have lost just one of their last eight meetings with the Baggies, and that was a 0-3 defeat in May of 2015 after they had already won the title. Discounting that trip to the Hawthorns, Chelsea have won one and drew another in their last three visits to the West Midlands.

The reverse fixture earlier in the campaign went the way of Chelsea by a scoreline of 1-0 after a late Diego Costa goal finally broke West Brom’s resolve. Judging by their most recent results and performances, we can expect a lot less fire and passion from them on Friday.

If Chelsea have shown any vulnerability of late, it is generally when teams have played against us on the front foot: the defeats against Crystal Palace and Manchester United spring to mind, as to a certain extent does the FA Cup semi-final against Tottenham.

But the good news is that West Brom won’t do that. Instead, they will look to contain the Blues for as long as they possibly can, with the express intention of scoring from set pieces.

So it will be a familiar scenario for Antonio Conte in trying to find a way past a resolute rearguard action. The selection of Fabregas should certainly help with that – the Spaniard is a master at unpicking locks, and with Costa rediscovering his touch in front of goal there should be no real problems for Chelsea overcoming the Baggies’ dogged resistance.

There’s every chance that the boys will be celebrating the first part of what would be an incredible double this season come Friday night.
Email ThisBlogThis!Share to TwitterShare to FacebookShare to Pinterest