They made us wait, but boy did it feel good when Michy Batshuayi steered the ball home in the 82nd minute to spark wild celebrations in the away end at the Hawthorns. After a year’s loaning of the Premier League trophy to Leicester, the silverware is back where it belongs in the Stamford Bridge collection.

It’s been a long old campaign but one that since November or so has been a delight to watch unfold. The switch to 3-4-3, perhaps over-emphasised upon but hugely important nonetheless, has been the catalyst, and so Antonio Conte deserves all the credit he will get in the coming days.

Surprisingly, West Brom offered stubborn resistance on Friday night – doing away with the notion that some of their players were already ‘on the beach’, as the late season cliché goes. They offered little going forward but were dogged in their defensive work and clearly relishing in their role of ‘spoilers’.

It was slightly strange, in some ways, that the player who would finally break the deadlock was the forgotten man in a blue shirt, Batshuayi. The lanky centre forward has made little impression in his first season in London, but what a fitting way to confirm your place in Chelsea folklore by netting the goal that ultimately secured the title.

There are two games of the campaign left to go, and you suspect Conte will not want his players to rest on their laurels – particularly on Monday night, where the party atmosphere should hopefully automatically drive a big performance from the boys in blue. This is the official sign off from the 2016/17 campaign at the Bridge….let’s hope the players do us proud.

The only bit of team news of note to derive from Friday’s game was Conte keeping faith with Cesc Fabregas ahead of PFA Player of the Year N’Golo Kante. The manager was rewarded by a second consecutive Man of the Match performance from the Spaniard, who once again showed off his virtuoso range of passing.

You would imagine that Conte will name an unchanged side here. You could argue that the catalysts for the win over West Brom were late substitutes Batshuayi and Willian – will that be enough to get them a start on Monday? Perhaps not, but they will presumably get a chance to shine from the substitutes’ bench once again.

Another who will be sent on in a final farewell at the Bridge will be John Terry. The Blues legend has confirmed he will leave the club at the end of the season, and he will be handed an emotional swansong in front of the supporters who have given him so much love over the past 15 years or so. 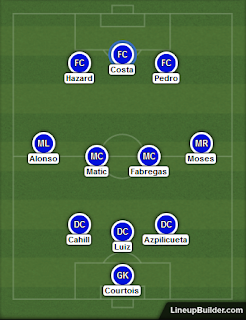 Chelsea vs Watford Head to Head

The overall head to head reads 15 wins to 9 in Chelsea’s favour, although those really are a game of two halves.

Between 1970 and 1987, it was Watford who enjoyed the bulk of the success, but since the turn of the Millennium things have switched in the Blues’ favour: since 2000, the form of Chelsea reads W8 D3 L0 against the Hornets.

There was a pair of draws between the sides last season – that 2015/16 campaign we don’t speak of – but Chelsea got back to winning ways earlier in the year with a 2-1 win at Vicarage Road courtesy of goals from Diego Costa and that man Batshuayi.

Did you know that Watford can, mathematically, still go down? It would require all of the sides below them to win all of their games, but it could still happen. So the Hornets will still possess plenty of fire.

But the form simply isn’t there: four defeats on the bounce, plus five in six, and the fact that they have only scored one goal in their last half-a-dozen outings, suggests that they are way off the mark that saw them as high as eighth in the table earlier in the campaign.

Walter Mazzarri has been hamstrung by injuries this term, and that theme continues here. Defenders Younes Kaboul, Craig Cathcart, Miguel Britos and Christian Kabasele are all either definitely out or facing a late fitness test, and clearly if two or more of that quartet are absent it will greatly impact upon the Hornets’ ambition.

The stats would suggest that they can’t hurt Chelsea in an attacking sense, and if we ally that with their defensive personnel issues then you would suggest the Blues should win this game at a canter.

With the pressure off, we can expect a grandstand performance from the Chelsea players to go with the champagne atmosphere.


Embed from Getty Images
Email ThisBlogThis!Share to TwitterShare to FacebookShare to Pinterest