If ever there was a sign that Chelsea are ready for coronation as Premier League champions, it was our 3-0 victory over Everton last time out.

If you read our preview of that game you would know that the Toffees had won their eight prior games at Goodison Park – yes, eight. So for Chelsea to roll into town and put three past them without reply is a marker of intent. These blue boys are ready to be anointed.

There’s still work to be done though, and in situations like these so often complacency can become an issue. A home game against Middlesbrough….that’s three points in the bag, isn’t it?

It probably should be, but the Boro are in dire straits at present and simply have to win this game to have any chance of avoiding relegation. That makes them a dangerous animal.

Ordinarily of course the North East outfit would come here, stick ten men behind the ball and make life very difficult for the Blues, but here they may just play a more expansive game; which could pose problems defensively as well as offering potential going forward.

But to be surgical and clinical about it, if Chelsea play as well as they did against Everton then they will win this game. The first half was a well contested affair with both sides creating half chances, before Chelsea put their foot down in the second half and strangled the life out of their hosts.

Goals from Pedro, Gary Cahill and Willian sealed the deal for Antonio Conte’s men, who know that three wins from their remaining four games will be enough to clinch the title. They will be looking to land one of those on Monday night against the Boro.

Conte was able to field his full strength starting eleven against Everton last time out, and that has been a feature of the season as a whole: if you want to win silverware, you need to keep your best players fit.

There was a concerning moment on Merseyside when David Luiz limped off with a groin injury, ad while the prognosis is said to be positive it may well be the case that Conte simply doesn’t risk the Brazilian for this game.

Instead, we’re likely to face a trial by air against Middlesbrough should they go with one or both of Alvaro Negredo and Rudy Gestede in attack, so bringing in a physical presence like Kurt Zouma would not be the end of the world. 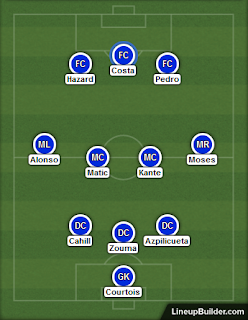 Chelsea vs Middlesbrough Head to Head

Very few people will be surprised to learn that Chelsea enjoy a healthy head-to-head record against Middlesbrough, and historically that extends to 55 wins to 31 with 29 draws.

The modern day record is perhaps the most educating. Since the turn of the millennium, the two teams have met on 22 occasions; with Chelsea gaining the upper hand 15 times (three defeats, four draws).

And it’s pretty obvious that the Northerners hate making the trip down to London. Middlesbrough last won at Stamford Bridge in 1975 – some 24 visits ago! Since then, Chelsea’s record reads W18 D6 L0….so they should be winning this game, shouldn’t they?

A feature of Middlesbrough’s game this season, it has to be said, is how little threat they have posed going forward. Their sole modus operandi appears to be diagonal balls into Negredo – not a bad tactic given how strong the Spaniard is in the air, but it’s a tactic that has failed pretty much across the board.

Their other outlet – the pace and trickery of Adama Traore down the right-hand side – is one that offers something of a juxtaposition. Traore is outstanding at taking on and beating his marker, however his end product leaves a lot to be desired. He has created moments of excitement for the Boro this term, but for somebody with his ability to go round the full back his actual output is rather disappointing.

All in all, Middlesbrough have failed to find the net in eight of their last ten away games, keeping two clean sheets in the same run. That does not bode well for the travelling supporters, who haven’t had a lot to celebrate this season.

So can Chelsea afford to rest on their laurels here? Of course not, and as we’ve already mentioned complacency would be our worst enemy here. Antonio Conte strikes us as the kind of manager that won’t allow for any let up in intensity though, so hopefully his players will be tuned into what should be a season-defining performance at the Bridge on Monday night.
Email ThisBlogThis!Share to TwitterShare to FacebookShare to Pinterest