Inevitably, Jose Mourinho’s first return to Stamford Bridge after his ignominious sacking will dominate the headlines – it’s only natural when Sky Sports have artificial hyperbole to build, and that should not overshadow what is likely to be a highly tactical affair; even if it is the spectator that misses out.

The Blues should be in good spirits heading into Sunday’s clash after their complete and utter dominance of Leicester last time out. Antonio Conte’s reimagined 3-4-3 formation came up trumps once again as his side ran in three goals – and could have had more, and restricted the Foxes to pot shots from long range. This new system is working out very nicely for the Italian.

How his troops will deal with the hysteria surrounding Mourinho’s return will go some way to deciding Sunday’s match, and their capability in breaking through the Special One’s parked bus will also determine where the points go.

No injuries, no worries for Conte, who will also welcome Willian back into the fold after he missed the Leicester game on compassionate grounds. The Brazilian may just have a job on his hands to dislodge Pedro, who was outstanding as his replacement.

Otherwise, it will be business as usual for the Blues ahead of the visit of United, although we have a sneaky suspicion that Conte might be tempted to bring John Terry back into the side to deal with the physical presence that is Zlatan Ibrahimovic. Who will make way? Possibly Cesar Azpilicueta, which would be harsh on the Spaniard who has been excellent as the third centre half in recent weeks, or maybe Victor Moses, with Azpilicueta switching to right wing back. That would be equally as harsh on the Nigerian, who has been outstanding since featuring in the starting eleven.

N’Golo Kante will be tasked with keeping Paul Pogba quiet, and with Mourinho likely to go down the conservative route once again the Blues defence can expect plenty of long balls directed towards Ibrahimovic.

The key player for Chelsea will be Nemanja Matic, who will be expected to distribute the ball effectively even in the crowded midfield battleground. If he can break the lines and get Hazard and Willian/Pedro into the game, that will be the best way to break down this stubborn United rearguard. 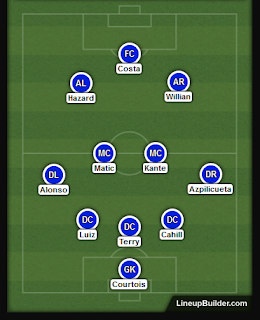 Good news for Blues fans: we haven’t lost to United since the 2012/13 campaign, on that fateful day at the Bridge when Branislav Ivanovic and Fernando Torres were sent off in a 2-3 reverse. Since then we have mostly dominated the head-to-heads; W4 D6 L0 is a decent enough record anyway.

Indeed, historically Chelsea have dominated against United on home soil, having lost just three times in 22 meetings. That bodes very nicely ahead of Sunday’s clash.

With great difficulty would be the first observation. Anybody who saw Manchester United’s clash with Liverpool on Monday night – and anybody who followed Chelsea during the Mourinho years – will know of his penchant for a rather pragmatic style of play when up against a quality opponent on away soil.

So we can expect the Red Devils to flood the middle of the pitch with bodies in an attempt to stifle our creative talents, and when not in possession their wide man will retreat in an attempt to help their midfielders with Hazard and Willian dropping into the half spaces.

So instead, we suspect that Hazard and Willian will be instructed to hold their width, and with Alonso and Azpilicueta/Moses joining in that could be an area where the Blues can get around the sides of a stout United line. In this system Matic will be encouraged to get forward and support Costa in central areas.

At the other end of the pitch we really shouldn’t have too much to worry about. Ibrahimovic will be feeding off scraps if United line up in a similar fashion to Monday night. As long as Pogba is shackled in the middle of the park it is hard to see Chelsea not extending their run of clean sheets to three.

Set pieces could be an area in which Chelsea prosper too; should Terry, Cahill, Luiz and Costa all start their aerial prowess will be a real threat. So our wide men isolating themselves against their markers – especially Hazard on the clumsy Antonio Valencia – could deliver the ultimate dividend.