The international break….what is it good for? Does anybody truly take any enjoyment from it? And couldn’t World Cup qualifying be settled in a campaign which is a lot less long-winded and contains fewer pointless fixtures (no offence San Marino fans).

If having international players picking up injuries in meaningless friendlies and qualifiers means clubs are a victim of their own success in attracting top-level stars, then really the game’s gone wrong.

That came about because Chelsea were set to be without both Diego Costa and Eden Hazard for this week’s match with Middlesbrough when both picked up injuries whilst on duty with Spain and Belgium respectively. The good news is that Hazard has recovered fully and Costa has returned to training, so both should be on the bus north.

That’s a timely boost, as the international lay-off rather got in the way of the Blues’ outstanding form. Since Antonio Conte did the business and transformed his side into a 3-4-3 winning machine, all foe have been swept aside with consummate ease.

Mind you, the Boro are probably pretty peeved that their mini revival has been scuppered by a fortnight’s inactivity. Draws with Arsenal and Manchester City, plus a 2-0 win over Bournemouth, have renewed confidence in the camp and Aitor Karanka will have been cursing his luck at the break.

We’ve already mentioned the travails of messrs Costa and Hazard, but happily that particular tale should have a happy ending with both set to take to the field at the Riverside Stadium.

Further good news comes in that Cesc Fabregas and Kurt Zouma should be fit enough for places on the substitutes bench after lengthy injury lay-offs. Neither can command a regular starting spot at the moment, but their presence when the fixture list becomes rather cramped around Christmas and the New Year period will be gratefully welcomed.

With the same personnel delivering five consecutive victories and a handful of clean sheets, there really is no need for Costa to change his set-up. 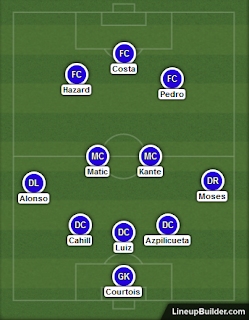 Historically, Chelsea have had the upper hand over the Boro as you can probably imagine. In 91 head-to-head meetings, the Blues have prevailed in 42 meetings and suffered defeat in 24, with 25 draws.

More pertinently, Chelsea have won each of the last six against Middlesbrough; who have failed to score a solitary goal. But those matches came in 2006-2013, so we have to take them with a pinch of salt.

But some statistics are simply too interesting to ignore, and the fact that the Blues have lost just two of seventeen in the English top flight to Middlesbrough is pretty damning of a quality gap between the two sides.

The beauty of the 3-4-3 system is that it offers stability in defence while enabling plenty of bodies to flood forward to support the attacking phase. This system also offers numbers in wide areas, and that could be crucial to Chelsea winning this match.

Five of the Boro’s last seven goals have come directly or indirectly from crosses into the box, and so the job of the wing backs here will be to stay close to their men and prevent them from getting crosses into the box. On the left Middlesbrough have the much maligned Stewart Downing, who actually possesses a wand of a left foot, and he will look to swing crosses onto the not-inconsiderable bonce of Alvaro Negredo. Victor Moses will need to close Downing down quickly and show inside onto his right foot if we are to prevent that from happening.

One of Middlesbrough’s most impressive stars of late has been Adama Traore, the tricky right winger who has been timed as one of the fastest players in the Premier League. The plan to stop him will be two-fold: let Alonso drop off so that Traore can’t ‘around the back’, as John Barnes once rapped, and also that Gary Cahill, as the left-sided centre half, keeps a watching brief should Traore decide to nip inside.

Gaston Ramirez will need to be watched carefully in the number 10 role as he’s a crafty so-and-so, but other than that the Boro are a fairly ordinary team to play against. Their midfield pivot, Adams Clayton and Forshaw, are industrious and metronomic in possession, but can be overpowered. Defensively they are solid; they’ve only conceded two goals in a single game once in their last half-dozen outings, and so patience will be required until we break them down.

But, and it’s a big but, we quite fancy Chelsea’s win – and clean sheet – streak to continue here with a narrow victory.