When you scroll back through the recent history of English football, there can’t be many sides that have gotten the better of Chelsea from a head-to-head perspective. If there are, you would assume that it would be a side at the very upper echelon of the game.

Not so. Since the start of the 2009/10 season, Chelsea have beaten this week’s opponent Everton just six times in eighteen attempts, with six draws and six defeats. That means that the Blues’ success rate is a rather paltry 33% against the Toffees; a rather startling statistic.

The good news is that this particular vintage feels like a Chelsea 2.0 under Antonio Conte and his trusted 3-4-3 formation, and with four wins on the spin, eleven goals scored and none conceded since the Italian introduced the system we can be confident going into this game with the Merseysiders no matter what the history books might tell us.

Such self-assurance comes naturally when in your past three games you have defeated a trio of sides – Leicester, Manchester United and Southampton – who could all lay claim to being a top six outfit in the Premier League. The Blues are looking stable in defence, rigid in midfield and lively in attack, with the wing backs and Eden Hazard in particular taking their performance levels into the stratosphere in the past month or so.

The Saints are a fine side but were ruthlessly brushed aside by Conte’s men, and it was fantastic to see how secure we looked in defence. David Luiz is benefitting from having another centre half either side of him, and with the wing backs working hard down their respective flanks finally we are able to command the middle third of the pitch without having to commit bodies wide.

But it is in attack where the most obvious benefits to this 3-4-3 have been felt, and Eden Hazard in particular is blossoming. Shorn of his defensive duties, we have witnessed 2014/15 levels of performances from the Belgian; and that can only be a good thing. With Diego Costa banging in the goals, this Chelsea side is going to take some stopping.

This section of the previews has started writing itself. With no European football to worry about, Antonio Conte has no requirement to rest players and so, barring injuries, can name the same starting eleven week in, week out should he wish.

We are at full strength now with Cesc Fabregas having recovered from his thigh injury. So, Conte can name pretty much any side he wants! Naturally, the Italian will want to stick with the winning formula. 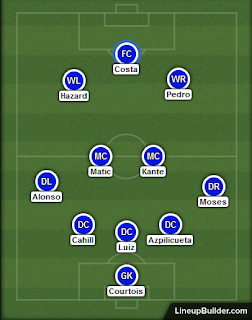 Chelsea vs Everton Head to Head

We’ve mentioned a bit about Everton’s surprisingly good record against Chelsea in recent times, and that is a feature throughout history too. There has been some 163 meetings between the two teams since 1907, with Chelsea holding a narrow 61-52 lead.

As far as more contemporary matters are concerned, we’ve already noted the W6 D6 L6 record that both teams boast in the past seven years or so, but what about matches played at Stamford Bridge? Here the news is much brighter for Blues fans. Everton’s last win at the Bridge came in 1994 – some 25 meetings ago! In that time there has been 14 Chelsea victories and 11 draws, so that’s another string to the bow heading into Saturday.

We’ve written at length about Chelsea’s new shape in recent weeks, and how it causes problems for the opposition with attacks being launched from all angles. But we haven’t considered just how reliable it is defensively, and up against an impressive Everton side – former blue Romelu Lukaku and all – this will come into question once again.

But four clean sheets in a row indicates that the system works, and it is about having bodies in the right places at the right time. Lukaku will be well marshalled by Luiz and Cahill, with Azpilicueta will be required to deal with Kevin Mirallas. Ross Barkley, at times anonymous this term but impressive last week, will need to be picked up by either N’Golo Kante and/or Nemanja Matic so that he can’t dictate traffic.

On the left, Marcos Alonso will have his hands full with both Yannick Bolasie and Seamus Coleman charging forward, and so he will need support from Hazard to avoid an overload situation – that could be an area of weakness for the Blues.

Going forward, it will be same again for Conte. Hazard will drift in from the left and look to slide passes through to Costa, who should have the advantage against Ashley Williams. The Welsh defender is an excellent presence but lacks pace on the turn, so cute throughballs will be the order of the day for the Spaniard to exploit.

We also like the Moses-Pedro combination down the right, with Kevin Mirallas not known for his defensive work, Bryan Oviedo replacing the injured Leighton Baines and Gareth Bale lacking the mobility to cover across from midfield. This could be Everton’s Achilles heel, and should offer Chelsea plenty of joy as they look to extend a run of four straight victories.