We can argue about the merits of a run in the Carabao Cup until we’re blue in the face, but one thing everyone can agree on is that winning football matches – no matter which competition they’re in – is crucial to long-term success.

The naysayers will say ‘well, what do we want to be in the Carabao Cup for!?’ It’s a fair question, given that a top four finish, a decent tilt at the Europa League and even the FA Cup take precedence.

But when you have a new manager who is looking to instil a different tactical dynamic, not helped by the pre-season disruption caused by the World Cup, game time becomes essential in those strategies being deployed and ‘accepted’ by the players.

So yes, there was plenty of value in the 2-1 victory over Liverpool in midweek. Not only was it another opportunity to bed in the new 4-3-3 system and give crucial minutes to fringe players, it was a chance to get one over on a side we again meet on Saturday at the Bridge.

The win at Anfield was underscored by an absolutely dreamy goal from Eden Hazard, who seems to be getting better and better with each passing campaign. He has already spoken of his happiness under Sarri, and the benefits are being felt on the pitch in the Belgian’s performances.

Gianfranco Zola, Sarri’s assistant, believes Hazard is operating on another level at the minute. “It's a fantastic goal. Not only the beauty of it but for the time he scored it,” he said.

“In my opinion we haven't seen the best of him yet. He is remarkable.”

Let’s hope Hazard can produce another world class performance against the Reds on Saturday.

Sarri made eight changes to his starting eleven for the midweek game; some out of necessity, and others to rest key figures and hand game time to those on he fringes of first team action.

The likes of Kepa, Marcos Alonso and David Luiz will come into the backline, while Cesar Azpilicueta should hopefully be able to start at right back despite his midweek exertions; the Spaniard is known for his ability to stack up plenty of consecutive appearances.

The fitness of Antonio Rudiger, who has a groin injury, will come under scrutiny, and with Andreas Christensen limping off in midweek let’s hope the German has a rehabilitative couple of days.

N’Golo Kante and Mateo Kovacic shared the midfield load on Wednesday, and so hopefully they will be fit enough to join Jorginho in the centre of the park on Saturday.

Cesc Fabregas, who looked excellent against Liverpool and should enjoy the possession game favoured by Sarri, is perhaps not yet fit enough to start two games in the space of three days.

Hazard and Willian will surely start on the flanks – particularly with Pedro still struggling with a shoulder injury, while up front you suspect Olivier Giroud will be the go-to man.

He started against West Ham last time out in the league, while Alvaro Morata was given the booby prize of a Carabao Cup appearance. 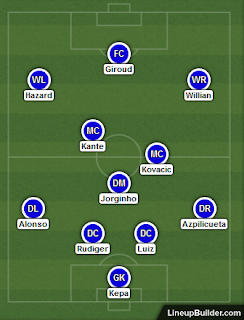 Chelsea vs Liverpool Head to Head

Apparently, Chelsea vs Liverpool is the most played game between two English teams since 1900.

There has been 180 meetings, which takes some topping, with Chelsea improving their record to W63 D40 L77 against the Reds with that midweek triumph.

We’ve lost just two of the last fifteen as well, and the last time we met Liverpool at the Bridge we delivered a masterclass in keeping their vaunted front three quiet: Giroud nodding the winner in a 1-0 victory.

The BT Sport big cheeses don’t need to hire any studio pundits for this one: we all know how this match will pan out.

Chelsea will dominate possession, as is rule one of ‘Sarri-ball’, with lots of sideways and backwards to passing to recycle the ball and keep it away from Liverpool’s dangerous attacking forces.

The Reds will press high up the pitch, and attempt to spring the likes of Mane and Salah clear on the counter attack.

The winner of the contest will be the side that best deploys their strategy on the day, and like a boxing match where the two fighters serve up wildly contrasting styles, it may come down to one key moment to break the deadlock.

In Hazard we have one of the most obvious match winners on the pitch, while the Reds will look to get in behind our defence with a quick, incisive through ball.

It is also worth noting that Liverpool have scored more goals from set pieces than any other side so far this term.

It’s a match that has a 50/50, pick ‘em feel to it, and so hopefully Chelsea’s fantastic head-to-head record with Jurgen Klopp’s side may just be the defining factor.
Email ThisBlogThis!Share to TwitterShare to FacebookShare to Pinterest