Embed from Getty Images
As footballing disasters go, Chelsea’s 2-3 defeat against Burnley last time out was right up there with the best of them.

Starting your reign as Premier League champions with a defeat on home soil is one thing, but to have two key players sent off the in process – who now miss a key game this Sunday – is quite another.

So yes, club captain Gary Cahill and Cesc Fabregas will miss the trip across the capital to Wembley in a huge game against Spurs, and it has to be said that Antonio Conte’s decision to let Nathan Ake, Nathaniel Chalobah and Ruben Loftus-Cheek has been cruelly exposed even at this early stage.

Embed from Getty Images
There really aren’t that many plus points to take away from the game against Burnley. Clearly having your captain sent off after 14 minutes is going to change the nature of a fixture, but the Clarets were the better side for much of the game regardless.

Alvaro Morata scored on his debut and looked to have taken to English football with aplomb; his movement and touch was outstanding. But really there is little else to be said about the Burnley match – let’s draw a line under it and move on.

Ordinarily we’d be licking our lips in anticipation at a meeting with Tottenham, but without two of our three recognised central midfielders, and our creative spark in Eden Hazard, it is going to be a very difficult task indeed. Let’s hope Spurs’ Wembley hoodoo strikes again.

Let’s not beat about the bush: Chelsea are short staffed in the middle of the park. Without Fabregas and injured new signing Tiemoue Bakayoko, N’Golo Kante is starting to look rather lonely in midfield.

And that’s a worry, because that is where Tottenham are at their best with the outstanding Mousa Dembele joined by Eric Dier to his side and Dele Alli and Christian Eriksen in front.

So Conte must find a solution, and he has only three real options: hand 19-year-old Kyle Scott his full Chelsea debut, rush Pedro back from his ankle injury and slot him in the middle, or source another alternative, such as the versatile Cesar Azpilicueta, to play there. Of the three options, the latter is most likely with Andreas Christensen coming in at centre back and Victor Moses returning from suspension.

The other problem is that, with Eden Hazard out until September following ankle surgery, we are short in those attacking midfield areas as well – particularly if Pedro doesn’t recover in time. Conte handed a start to Jeremie Boga against Burnley, but he would surely be loathe to use the youngster at Wembley.

One solution is a slight tweak to the 3-4-3 formation, which Conte tried in the International Champions Cup against Inter Milan. Rather than having two attacking midfielders dovetailing, the Italian selected Morata and Michy Batshuayi through the middle together, with Willian slotting in just behind. That might be the way he goes against Spurs.

Either way you look at it, the Blues are in a pickle right now and Conte is right: we need new players….and fast. 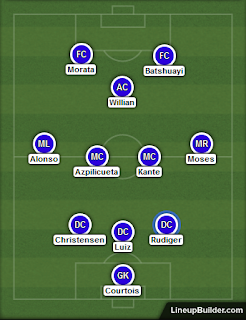 Well, what a storied past these two teams share. They’ve met more than 150 times in the past in all competitions great and small, and Chelsea have just about taken the bulk of the honours with 67 wins to 51 (40 draws).

The recent history has been littered with controversial moments, and of course that clash at the Bridge in May 2016, when the Blues ended Spurs’ hopes of winning the Premier League title courtesy of a Hazard double. It kicked off big style that day, and the two subsequent encounters between the pair have been feisty, to say the least.

The two sides met three times last season, sharing the honours in the league (0-2 at White Hart Lane and 2-1 at the Bridge) before Chelsea won in the FA Cup semi-final at Tottenham’s new Wembley home 4-2.

Antonio Conte’s team selection will go a long way to defining how this match pans out. If he brings Azpilicueta into midfield then that will add a sturdy base from which to build, and at least gives us hope that Spurs’ attacking midfield trio won’t dominate proceedings.

The thought of Morata and Batshuayi as a pair up front is intriguing – the former’s guile and footballing brain mixed with the latter’s pace and brawn could be a heady mix. Conte deployed the 3-5-2 system to good effect when manager of the Italian national side, so that could be his trump card on Sunday.
Embed from Getty Images
Victor Moses will return on the right, and with Marcos Alonso on the left that is some quality in wide areas that the Blues will hope to exploit. Tottenham utilise wing backs in all but name in Kyle Walker-Peters and Ben Davies, with the former still learning his trade and the latter still not convincing at this level. This could be an area that Conte seeks to exploit.

Perhaps the Wembley factor will come into play as well. The pitch there is longer and wider than at White Hart Lane, and perhaps that partly explains Spurs’ troubles there in the Champions League last term.

Many pundits will write Chelsea off this weekend, but let’s not be too hasty to jump on that bandwagon – the champions of England are chomping at the bit to bounce back.
Email ThisBlogThis!Share to TwitterShare to FacebookShare to Pinterest