One down, seven more to go: that will be the attitude of Antonio Conte after he earmarked 24 more points for the Blues to secure the Premier League title in his first season in charge.

"I think we need 24 points to win the league. For us it's important to go game by game without looking forward,” the Italian said prior to his side’s last outing. "It is important to beat Stoke and it won't be easy.”

Conte was right on that count. Chelsea did beat Stoke thanks to goals from Willian and Gary Cahill, but not before Jon Walters had netted a penalty for the Potteries outfit. It led to a fraught last half-hour or so for the boys, and we were very grateful for Cahill’s late strike that secured the three points.

Then the international break came; an excellent opportunity for those not involved to recharge their batteries. Those that were selected have, by and large, come through unscathed.

If Chelsea do require 21 more points to claim the Premier League crown then they will be hopeful that they can pick up three more towards their tally at the Bridge on Saturday. Opponents Crystal Palace have improved of late with three straight wins, but those all came against sides outside of the league’s top six. How will the Eagles fare against an elite outfit?

Their cause certainly won’t be helped by the likely absences of former Chelsea man Patrick van Aanholt, Mathieu Flamini and James McArthur for a trip across London that, historically, they haven’t enjoyed making.

All of the above being said, Chelsea have not been without their own injury worries this week. Diego Costa, Eden Hazard and Thibaut Courtois all sat out their respective international matches as they nursed injuries, but the good news is that all three of them should be fit enough to take to the field on Saturday.

Costa suffered an ankle injury in training with Spain, but thankful subsequent X-rays showed nothing untoward. He was left on the bench in Tuesday’s friendly with France, and should be fit to pull on the blue shirt on Saturday.

The same goes for Hazard and Courtois. Hazard missed Belgium’s double header and returned to London to seek treatment on the calf strain that caused him to miss the game with Stoke. Courtois, meanwhile, hurt his hip in Belgium’s 1-1 draw with Greece, but is expected to make a full recovery in time for the trip of the Eagles.

Victor Moses picked up a calf injury in the FA Cup clash with Manchester United a couple of weeks ago and was expected to face a spell on the sidelines. But he showed the recovery time of peak Bruce Willis in Unbreakable to take to the field against Stoke, and so Conte should be able to name a full strength side on Saturday. 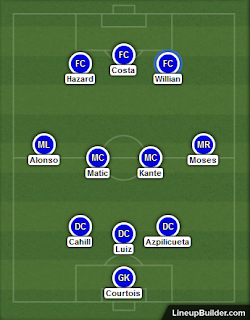 Let’s assume that Palace’s win at Stamford Bridge in August 2015 – as part of the beginning of the end for Jose Mourinho - was an anomaly. We have to, because otherwise we note the Eagles have soared in only two of their last twenty outings against Chelsea.

Palace’s record on our patch dating back 15 years reads W1 D1 L3, but obviously there has been a lot of water under the Bridge since then (boom boom).

Chelsea won twice at Selhurst Park in 2016: 3-0 in January and then 1-0 in this season’s encounter, when Diego Costa’s goal on the stroke of half-time sealed the deal.

Sam Allardyce is the master at setting his teams up to play antagonistic football, and despite the Eagles winning three games on the bounce – and not conceding a goal – just prior to the international break, we suspect he will look to upset Chelsea’s rhythm as much as possible here by getting plenty of bodies behind the ball.

Chelsea’s joy will likely come down the flanks as Allardyce tries his upmost to close down the middle of the park. Down the left Palace will greatly miss Van Aanholt, who is a far better player than his CV would suggest (his formative years at Chelsea apart, of course!). Handy defensively, he’s one of those defenders who is probably better going forward, and Moses plus Pedro/Willian will have a field day in his absence.

And on the other wing Palace deploy Wilfried Zaha, an outstanding talent who can be more than a handful to mark on his day. But the Ivorian simply does not defend or work back, and that could leave Marcos Alonso and Eden Hazard doubling up on the Eagles’ right back. That would be catastrophic for them.

It won’t be a pretty sight – Allardyce will see to that, but we expect Chelsea to edge one step closer to the Premier League title with a one or two goal victory to nil.