Any doubts about Chelsea’s credentials without Diego Costa and N’Golo Kante can be cast aside with relish. The Blues tore Bournemouth to shreds last time out, and the 3-0 scoreline flattered them more than it did us.

Antonio Conte opted to field Pedro and Willian as rotational frontmen in the absence of Costa, rather than bringing in Michy Batshuayi. That is harsh on the big Belgian, and suggests he is struggling to adapt to the pace of English football. That is the only downside to come out of a glorious festive period (so far) for Chelsea.

The victory over the Cherries takes our win streak to twelve, and we are now just two matches shy of Arsenal’s all-time record of fourteen; what a fillip it would be to draw level with the Gunners at White Hart Lane on Wednesday!

But the downside of many a potential champion over the years has been complacency, and writing off this Stoke side – despite their poor run of form – would be disastrous. They may be winless in four, but they have shown glimpses, especially in attack, that they can cause problems.

But even so, Conte will have one eye on the trip to Spurs on Wednesday evening (January 4; it is easy to lose track of the days at this time of the year!). With a couple of players at risk of suspension, he may well make changes here. Not that that should derail the Chelsea title charge too much.

Both Costa and Kante are available again after suspension, and missing the Bournemouth game has been a blessing in disguise for the duo. The Blues cruised to victory comfortably in their absence, and yet the pair have fresh legs ahead of the Stoke-Spurs double header. It’s funny how things work out sometimes in life.

The slightly more negative news is that David Luiz and/or Nemanja Matic would miss the Tottenham game should they pick up a yellow in this match, and that may just inform Conte’s team selection. He will be loathe to break up our outstanding back three, but Luiz’s poise and positional sense will be more greatly required against Spurs than it would against the rather more pragmatic Stoke. With John Terry’s inclusion a plus to help deal with Peter Crouch and Jonathan Walters’ aerial threat, expect the fit-again club captain to make his return here.

And with Kante back from suspension, and Cesc Fabregas turning in some fine performances in midfield of late, we would expect the Spaniard to take his place ahead of Matic here. The Serbian’s dynamic presence in midfield will be desired against Spurs.

One player who will definitely miss the Stoke game is Pedro, who picked up his fifth booking of the campaign against Bournemouth. 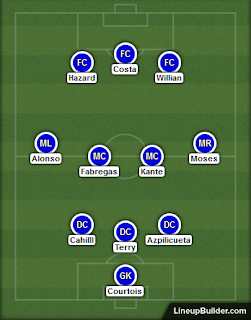 Chelsea typically enjoy the best of the head-to-heads with Stoke; certainly in the past 30 years anyway, where their record reads W14 D4 L2.

The slight anomaly comes from the most recent fixtures, which have ended in a pair of draws and a Chelsea defeat. It was back in March at the Bridge where a late Stoke equaliser stole a share of the points in a 1-1 stalemate (the Blues’ goal that day came from Bertrand Traore), while the rot had truly set in for the Mourinho administration during our 0-1 reverse at the Britannia Stadium in November 2015.

This Chelsea side has a new dynamic under Conte, and we expect a much different result on Saturday.

Mark Hughes chose an interesting gameplan for his side’s trip to Anfield on December 27; attack them, with two powerful strikers in Peter Crouch and Jonathan Walters. It worked, to an extent, in the first half with the Potteries side taking the lead, but ultimately it was a strategy doomed to failure – as the 1-4 scoreline testifies.

How he will attempt to tackle Chelsea is anybody’s guess, although attacking us at the Bridge would be tantamount to suicide. A rather more pragmatic Stoke set-up is anticipated.

The beauty of the 3-4-3 system is that even if Stoke get plenty of bodies behind the ball, the width created by Victor Moses and Marcos Alonso ensures that little pockets of space open up for Fabregas and Kante coming short to collect the ball from their defenders, and Hazard and Willian drifting into the half spaces. As we proved against West Brom a few weeks ago, this Chelsea side is capable of circumnavigating a parked bus; even if it takes the bulk of the 90 minutes to do so.

So patience will be key for the Blues once again, but breaking down a Stoke side that has conceded nine goals in their last four outings should not prove too problematic. It could well prove to be a case of lucky thirteen for Conte’s men.